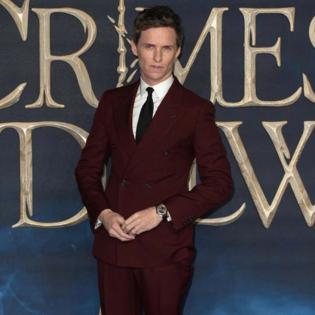 Eddie Redmayne has performed his new West End show in a care home.

The 39-year-old actor treated his beloved grandma to a performance of 'Cabaret' in the care home, as she wasn't able to attend the theatre in London.

Eddie - who stars in the production alongside Jessie Buckley - explained: "She is nearly 100 and not able to come and see the show, so I went to her care home with the karaoke version of the musical and performed the whole thing for her - even Jessie's parts.

"She definitely dropped off - she said she was closing her eyes because she was enjoying it so much!"

Eddie - who has enjoyed success on stage and on the big screen - has admitted to having lots of fun with the new production.

Asked how the musical differs from the film and the previous stage production, he said on 'The Graham Norton Show': "They are both beautiful and extraordinary, but Jessie and I love the musical so decided to investigate it in a different way.

"It's properly immersive for the audience, you really feel like you are in the Kit Kat Club in Berlin."

Meanwhile, Eddie previously admitted to being motivated by fear.

The acclaimed actor confessed to having moments of self-doubt - but he thinks it encourages him to work harder.

Asked whether fear motivates him, Eddie explained: "It's definitely an aspect of it. Yeah. Kind of fuels you with adrenaline and all those nerves, all those things that kind of keep you on edge keep you super-engaged and sensitive and responsive.

"Actors who perhaps are super-confident and have absolute belief in themselves I always admire, because I can't really be like that. Because you never know what's right, what you feel inside versus what is portrayed.

"The depiction of the exterior as opposed [to] what you're feeling inside is always so different that it's impossible to know what is right."