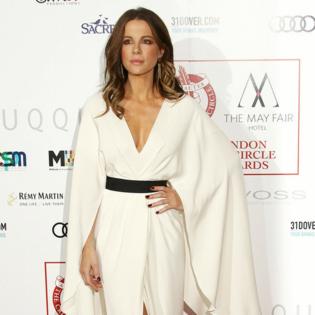 The 48-year-old actress has revealed her mother, Judy Loe, had her brain power tested when she was a child and found her IQ to be at 152 - which is considered to be "very high" - although Kate is convinced she's "burned a few brain cells" since she took the test.

When asked during an appearance on Howard Stern's radio show if she's ever done an IQ test, she said: "I did. I'll have to ask my mum. It was very high. I think she had me tested because very bright children are nearly unbearable.

"They tested me when I was young, so I mean I'm sure I've burned a few brain cells by now."

An IQ of 100 is considered to be average, while 130 and above is generally seen as a high IQ, meaning Kate's childhood score was significantly higher than average.

But the 'Jolt' actress says her IQ hasn't been much help in her career, and she actually believes being smart has been "no good" to her.

She added: "Every single doctor, every single person I've ever come across has said, 'You'd be so much happier if you were 30 percent less smart.' It's no good to me, though. It's really not helpful to me in my career. I just think it might have been a handicap actually."

Howard then asked if her IQ means she thinks men are "idiots" when she goes on dates, to which Kate quipped: "Don't you think most women say that?"

But Kate - who has daughter Lily, 22, with her ex-partner Michael Sheen, and was also previously married to Len Wiseman - says she tends to value humour over smarts when it comes to finding love.

She said: "I've found I can forgive an awful lot if someone is funny. There's a certain intelligence in someone being funny that I'm able to mess with."