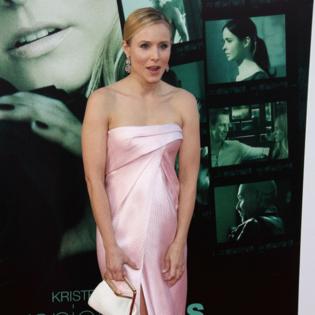 Kristen Bell has "never been more in love" with Dax Shepard than when he sucked out her clogged milk duct.

The 'Frozen II' star has two daughters - Lincoln, eight, and Delta, six - with her husband Dax, and has opened up on the time she needed her spouse's help to relieve a blocked milk duct that had formed while she was breastfeeding.

Speaking to Katie Lowes during her 'Momsplaining' segment on 'The Ellen DeGeneres Show', she said: "I said to my husband, 'I just need you to suck this out.' We could talk about it. We could be weird about it, or you could just go ahead and nurse.

"He pulled it out. He had a cup next to him. He was pulling out and spitting into this cup, and I've never been more in love."

And Katie added that her husband Adam Shapiro - with whom she has three-year-old son Albee and 11-month-old daughter Vera - is equally as supportive, although the time hasn't come for him to help the actress nurse yet.

She said: "Adam has never had to nurse out a clog but he has said numerous times, 'I would do it.' "

Katie also spoke to Kristen about her struggles with postpartum depression, and admitted her battle with the illness - which she faced after both of her pregnancies -was "very scary".

The 'Scandal' star explained: "I should have been on high alert that if you've had it before, it can be worse with the second. Postpartum depression with my daughter, I got brought to my knees. Horrible, very, very scary, textbook - suicidal thoughts, terrible thoughts about my children."

Katie was officially diagnosed with postpartum depression and was prescribed medication, but the actress refused to accept her diagnosis at first.

The 40-year-old star told Kristen: "Even still I was like, 'No, no, I'm fine,' as panic attacks were rolling in more like every time my daughter's crying and I have to go breastfeed her. I don't want to go.

"Then I woke up and I started to have some really negative thoughts about my son, my toddler because he's a toddler and he's difficult. 'I don't want to do this. I don't want to be here anymore.'

"I've now started my medication journey so I have to say, thank god for science, friends, support systems, my doctors, everything, because everything everyone said was true, which was once you get on it and stabilise, you will feel like myself."