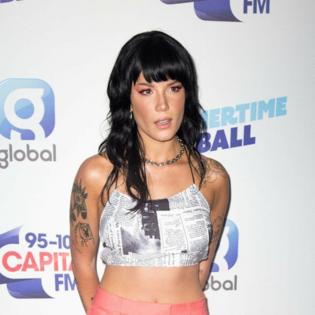 The 27-year-old singer - who uses she/they pronouns - welcomed their first child, a boy named Ender Ridley, with her boyfriend Alev Aydin in July this year.

And Halsey said they're glad they recorded their new album, 'If I Can't Have Love, I Want Power', before she gave birth because she only wants to focus on being a parent now.

She said: "I'm glad we got to make this album when we did because being a mother to my son makes being a musician seem pretty boring."

The 'I am Not a Woman, I'm a God' hitmaker also said welcoming their son marked the "death" of their "ego", because "nothing matters" when she goes home to her family.

She added: "Something really amazing happened when I did have my son, which is the absolute, glorious eradication and death of my ego. Nothing matters when I go home to him. He thinks I'm perfect and great and everything."

Halsey isn't experiencing any "parental guilt" yet, but knows that will be a "whole other beast to tackle" when the time comes for them to leave their son for work.

They told Billboard magazine: "The beauty of that is that it means I'm going to create when I want to. Hopefully, that means that whatever I make is going to be something that I'm just burning to get out there. Because the only expectation I have for myself is to be a really good mom, and the rest will fall into place around that."

On Twitter earlier this month, Halsey said she was suffering from guilt at times, and admitted they were "terrified" they won't "live up" to their own expectations of parenthood.

She wrote: "I feel guilty for working I feel guilty when I'm not working. I'm terrified I'll always struggle to live up to my own expectations. But I have also experienced love unlike any other and have finally learned how to ask for help and admit when I'm lonely or in need."