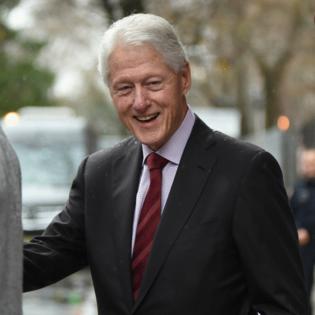 Bill Clinton is "doing great" after being discharged from hospital.

The 75-year-old former US President spent five nights at a Californian hospital after a urinary tract infection developed into sepsis, but he arrived back at his New York house on Sunday (10.17.21), and he is "really glad to be back home".

Speaking in a video shared on his Twitter account, he said: "I was so touched by the outpouring of support I received during my stay in the hospital, thanks so much.

Following his health scare, Bill has urged others to take care of themselves and admitted he is planning to do just that and keep doing "the most [he] can for a lot longer".

He added: "I'm on the road to recovery but I want to remind everyone out there, take the time to listen to your bodies and care for yourselves.

"We all have work to do, and each of us has an important role to play in life, and in the immediate future.

"I for one am going to do my best to be around to keep doing the most that I can for a lot longer."

After he was released from hospital over the weekend, Dr Alpesh Amin, who oversaw the team of medics who were treating the former US leader, said in a statement: "His fever and white blood cell count are normalized and he will return home to New York to finish his course of antibiotics."

Bill left hospital alongside his wife Hillary, a former presidential candidate, and he gave a thumbs up to reporters as he headed home.

He was in California to attend a private event for his foundation, but he started to feel fatigued last week.

And after undergoing a series of tests, he was admitted to hospital to receive treatment.

He tweeted: "He is in great spirits and has been spending time with family, catching up with friends, and watching college football.

"He is deeply grateful for the excellent care he continues to receive and thankful to the many well-wishers who have sent kind words to him and his family."

The 67-year-old actor wishes he'd spent more time with his '...And Just Like That' co-star - who died of pancreatic cancer in September aged 57 - while they ...Read More

Lil Wayne has been accused of pulling a gun on one of his bodyguards.

The 39-year-old rapper reportedly got into an argument with a member of his security detail at his Hidden Hills home and when things got physical, the ...Read More

Freida Pinto thinks it would have been "easier" for her to be successful if she was starting her career now.

Queen Elizabeth is in mourning following the death of one of her most trusted aides.

Ann Fortune FitzRoy, the Duchess of Grafton, served as the monarch's Mistress of Robes - a role which put her in charge of all matters ...Read More

Lily Collins thinks Hollywood should always try to "do better" when it comes to diversity.

The 32-year-old star's Netflix series 'Emily in Paris' - in which she plays the lead role - was criticised for the narrow make-up ...Read More