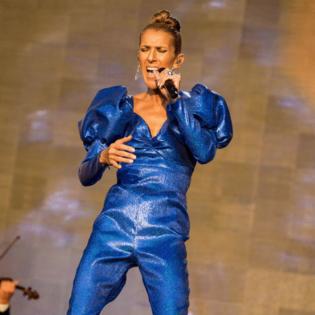 The 53-year-old singer was due to open her new show at the Resorts World Theatre in Las Vegas on November 5, but medical problems have forced her to postpone the event.

In a statement, Celine said: "I'm heartbroken by this.

"My team and I have been working on our new show for the past eight months, and to not be able to open this November saddens me beyond words. My partners at Resorts World Las Vegas and AEG have been working around the clock to get this brand-new state-of-the-art theatre ready, and it's absolutely beautiful.

"I feel so bad that I'm letting them down, and I'm especially sorry for disappointing all the fans who've been making their plans to come to Las Vegas. Now, I have to focus on getting better … I want to get through this as soon as I can."

Celine's Courage world tour is due to launch on March 9 next year, and it's currently unclear when the Resorts shows will be rescheduled for.

Meanwhile, Celine is reported to have been offering advice to Adele ahead of a rumored one-off concert in Las Vegas.

The chart-topping singer recently made her long-awaited comeback with her single 'Easy On Me', and she's apparently turned to Celine ahead of a potential gig in Sin City.

A source explained: "Adele has said that she wants to showcase the new album in Vegas with a one-off, very special concert. Ideally, she doesn't want it to be an arena.

"She is much more comfortable in smaller venues than playing to crowds of tens of thousands. And the smaller Encore is a very strong contender. Its old-school Rat Pack influences make it feel very 'her'."