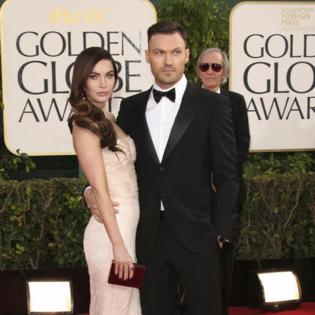 The 35-year-old actress and the 48-year-old actor have agreed to share joint legal and physical custody of their three children -- Noah Shannon, nine, Bodhi Ransom, seven, and Journey River, five.

Megan will also legally change her surname back to Fox.

According to TMZ, the pair did not have a prenuptial agreement, so under California law, any assets acquired during their marriage will be shared 50/50.

Details of financial settlements, such as child and spousal supports, were not revealed in the latest documents filed.

Megan is currently dating Machine Gun Kelly, while Brian has moved on with 'Dancing With The Stars' professional dancer Sharna Burgess.

It was previously revealed that although Megan and Brian had an acrimonious split at first, they are now co-parenting their kids amicably.

A source said: "Things have calmed down and are going a lot smoother. Brian has accepted it's over for good with Megan and has moved on. It's allowed for a much more peaceful co-parenting relationship.

"They still have things that come up. However, he is very happy with his own life and his relationship, so that has helped. They are all adjusting to this situation well.

"The kids like spending time with both parents and their significant others. Everyone is doing a lot better."