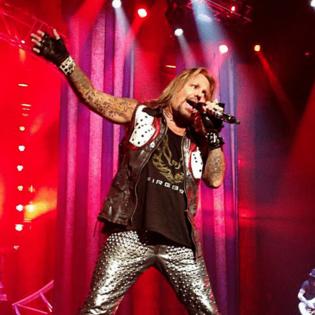 Vince Neil was rushed to hospital after falling off stage during a concert.

The Motley Crue frontman was performing at the Monster on the Mountain festival in Tennessee with his solo band on Friday night (10.15.21), when he fell through a gap between one of the speakers and the stage.

TMZ reports that Vince was only a few songs into his set when the freak accident occurred and he was helped to his feet by roadie a and a security guard.

He was taken to hospital by ambulance and his band were worried that he had broken his ribs.

According to Ultimate Guitar, bassist Dana Strum told the crowd: "The truth is - Vince fell and broke ribs when he fell.

"He can't breathe and he's gonna get dealt with medically.

"He was so excited to be here. He lives in Tennessee. But he was willing to stick it out and tough it out when the people back here were telling him, 'Don't do it.'

"Let's have one good round of applause, please, for this guy."

The band carried on without Vince to finish the set, with guitarist Jeff Blando taking over lead vocals.

"Vince slipped and fell off the stage tonight at Monsters on the Mountain here in Pigeon Forge.

"Vince had been moving & singing great before the accident. He's at hospital now getting care & X Rays. More when I hear. Get well VN!"