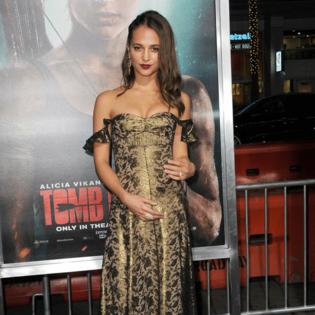 The 'Green Knight' actress has confirmed she gave birth to her and husband Michael Fassbender's child in August, the couple haven't disclosed the name or even the sex of the tot because she prefers to keep her personal life private and will only reveal things she's comfortable with rather than feel forced into anything.

She said: "There's so much pressure with social media to share things nowadays, even if you're not doing what I'm doing.

"If one day, I want to start an Instagram or social media account, then I will do it. But I need to know that it's a choice that I make and that I don't feel pressured by society."

And Alicia insisted her work is "better" if she's able to maintain a separation between the professional and personal.

She told Total Film magazine: "I get to do my films and I really enjoy talking about them.

"But I know that I'm better at my job if I get to go home and not take work with me.

"Also, it's better for my mental health."

The 33-year-old star previously worked with Michael on 'The Light Between the Oceans' and though she'd happily share the screen with her spouse again, they won't go deliberately looking for a joint project.

She said: "When we did 'The Light Between the Oceans', it happened because we both chose the film that we wanted to be part of.

"So if that would happen again, it would have to happen in the same way.

"It would have to be a project that we both seek out individually."