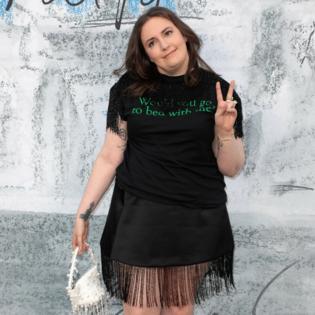 The 35-year-old actress-and-writer married Luis Felber over the weekend after several months of dating, and the musician has admitted he was too busy "living in the present [and] into the future" to catch her celebrated TV series when it first aired, but he's planning to watch it some day because he appreciates the "impact" the show had on people's lives.

Asked if he'd heard of Lena or seen her work before they got together, he said: "No. Mum was a fan of 'Girls.' I remember when I was touring in my 20s, my mum and my sister were watching that show. But I never watched it.

"I haven't [seen it now]. But I've watched her current stuff. I watched 'Industry' when we first started dating, and I scored her next film, 'Sharp Stick', which is out next year. It's a really beautiful film.

"When you're an artist, you're living in the present, into the future. You're looking for the next thing. Looking back is a thing we shouldn't really do too much, to be able to move forward with ease.

"But I will watch 'Girls' one day, to answer your question. I can see what an impact it's had on people.

"I was at lunch with some old school friends and my friend's sister was really excited about Lena. I asked, 'What did 'Girls' make you feel?' She said, 'I feel like it gave me a voice,' and that's amazing. What a beautiful thing to hear about your partner."

The Peruvian-English singer - who is known professionally as Attawalpa - admitted there were "lots of moments" when he knew he wanted to marry Lena.

"Time is fluid and when you know, you know. I love my wife, who is also my best friend."

And Luis - who met Lena on a blind date - adores living with his spouse.

He gushed: "It's great, we've been living together for about four months now. We both work a lot, and every morning is a blessing. And every evening, to be able to go to bed with your best friend and chat -- we find it hard to go to sleep at a decent hour. It's rarely eight hours."