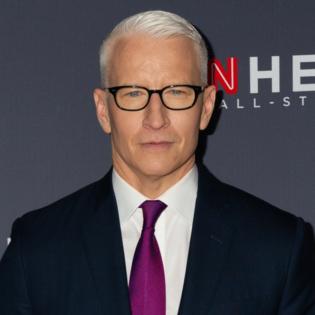 Anderson Cooper won't be leaving his son an inheritance when he dies.

The 54-year-old presenter - who is worth an estimated $200 million - insisted he won't be handing a "pot of gold" over to 17-month-old Wyatt expects him to fend for himself once he leaves college.

Speaking on the 'Morning Meeting' podcast, Anderson, who is worth an estimated $200 million, said: "I don't believe in passing on huge amounts of money.

"I'm not that interested in money, but I don't intend to have some sort of pot of gold for my son. I'll go with what my parents said … 'College will be paid for, and then you gotta get on it.' "

Anderson - who inherited $1.5 million from his mom, Gloria Vanderbilt, when the fashion mogul passed away in June 2019 - has chronicled his mother's side of the family in his new book 'Vanderbilt: The Rise and Fall of an American Dynasty' but he admitted it wasn't something he knew much about when he was growing up, recalling a funny memory of a day out with his father, Wyatt Emory Cooper.

He said: "As a kid, my dad did take me to Grand Central Station to show me the statue of Commodore Vanderbilt and that was the first time I had heard the Vanderbilt name.

"I just remember coming away [from] it believing for quite some time that all grandparents turned into statues when they die."

Despite inheriting some money from his mom, Anderson admitted in 2014 that he wasn't relying on receiving anything in her will.

He said: "My mom's made clear to me that there's no trust fund, there's none of that."

The CNN anchor previously explained he was keen to write the book for his son, who he co-parents with his former partner, Benjamin Maisani

He said: "In some ways I wanted this to be a letter to my son.

"My dad wrote a book before he died (during heart surgery when Anderson was 10) about his family growing up in Mississippi. And because he died when I was so young, a lot that I know of him came from that book.

"I wanted to write a letter to Wyatt about this crazy and unusual part of his family's past."