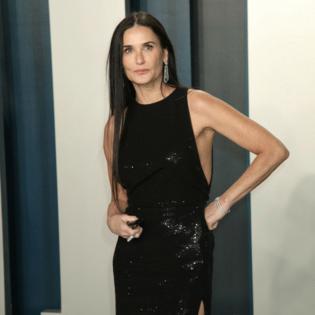 Demi Moore is looking for love.

The 58-year-old actress is on the hunt for romance once again more a decade after her split from Ashton Kutcher and an insider has revealed that the Hollywood star is "ready to put herself out there again".

The source told the US version of OK! magazine: "Demi's finally at the point where she doesn't feel she has to live up to anyone else's expectations.

"She's feeling really good about herself and is ready to put herself out there again."

The source added that Demi - who shares daughters Rumer, 33, Scout, 30, and Tallulah, 27, with her second husband Bruce Willis - is enjoying dating and has grown close to one man.

The insider said: "She'd been single for nearly seven years, so this quite a change for her.

"She met someone she really likes, but they're keeping it under wraps."

The source also added that the relationship is "nowhere near serious".

The insider also explained that the 'Ghost' actress sticks to a vegan diet to keep herself in good shape.

It explained: "Demi's sex appeal is her signature, and she has no intention of letting herself go.

"She's ditched all sugar, caffeine, and gluten, and sips hot water with lemon when she needs a pick-me-up. She's in fantastic shape."

The publication also claims that Demi's 2019 memoir 'Inside Out' marked a turning point in the Hollywood star's life.

It said: "Demi realised she needed to work on herself and get healthy. She spent time in Idaho looking after herself and living a low-key life with her dogs and working on her memoir."