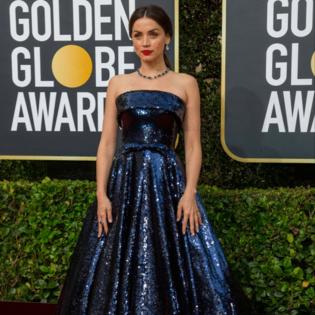 The 33-year-old actress grew up in Santa Cruz Del Norte in Cuba, and she admits that becoming a movie star seemed like a distant dream during her childhood.

She explained: "I had there, in front of my eyes, people who were not working or who didn't have money.

"On television I would see nothing more than old re-runs of soap operas or things that were of poor quality."

Ana first dreamed of becoming a well-known actress at the age of 12. However, it required a lot of courage and ambition for Ana to achieve her dream.

She told The Sun on Sunday newspaper: "I don't really remember a specific day that I said, 'I'm going to be an actress'.

"In my home, we never had videos, DVDs or VHS. We used to watch movies at my neighbour's home. If I saw a scene played by a woman or a man that I really liked, I would run to the mirror and repeat it.

"Then I would come back home and do the movie for my brother because he didn't see it.

"I couldn't dream of anything else outside Cuba. You grow up thinking that it's good enough, it's all you need, which in some way is true.

"You can dream big in Cuba but very few people can go outside and have the balls to make it happen."

Ana decided to leave Cuba for Spain at the age of 18, and she admits it was a life-changing decision.

The 'No Time To Die' actress shared: "I had the balls and a Spanish passport. When I was 18 and graduated from school, it just came to my mind. I wanted to go to Spain and just try - audition for something and see what happens.

"So I bought a ticket, and I told my mum, 'When I run out of money, I'll come back'. I was lucky. I met a big casting director a week after I got there.

"He cast me for one of the biggest TV series ever made in Spain and I never went back.

"I started shooting, and it was like a 180-degree change in my life."