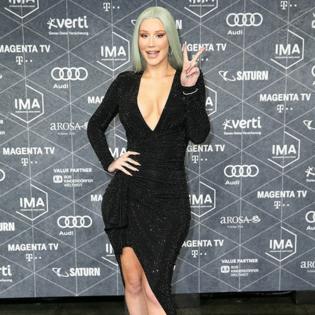 Iggy Azalea thinks men who try to control their partners are "pitiful creatures".

The 31-year-old rap star has taken to social media to hit out at controlling men - although she didn't direct her criticism at anyone in particular.

Iggy wrote on the micro-blogging platform: "Men who deal with their own insecurities by trying to control their partners are the most pitiful creatures."

One of Iggy's followers replied to her original message by tweeting: "men are trash (sic)"

In response, Iggy - who has Onyx, 16 months, with ex-boyfriend Playboi Carti and has previously dated the likes of ASAP Rocky and basketball star Nick Young - wrote: "It's true, I saw one irl before. (sic)"

Meanwhile, Iggy previously insisted that she's enjoying her life as a single woman.

The 'Work' hitmaker split from Carti last year, but she suggested that she's not living her life with any regrets.

Iggy also claimed she's not desperate to find a new boyfriend anytime soon, revealing that other things were topping her list of priorities.

She said: "I have a list of things I need to get and a man just didn't make the final cut (sic)"

Iggy is relishing the challenge of motherhood and has kept her fans up-to-date with her experiences via social media.

The rap star - who was born in Australia, but moved to the US during her teens - previously revealed she'd bought a "baby" Range Rover for her son.

The blonde beauty - who owns a Range Rover Autobiography - wrote online: "I bought onyx a baby range today and I'm so excited.