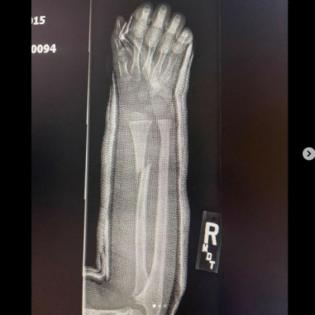 Two weeks ago, Kanye's estranged wife Kim Kardashian revealed their son Saint, five, had suffered multiple breaks in his arm and now Kanye, 44, has taken to Instagram to share x-rays of the injury.

He did not caption the picture but was inundated with well-wishes for the youngster from his followers.

Speaking previously about the injury, Kim said: "Who do you think cried more today? My baby broke his arm in a few places today. I'm not ok. Poor Baby."

Along with Saint, Kim and Kanye share children North, eight, Chicago, three, and Psalm, two, together.

Although the pair split in February, they have remained amicable and have been co-parenting their kids together.

A source close to Kim previously explained: "It's very important to her that the kids spend as much time as possible with Kanye. Kim is trying to be supportive. She is focused on co-parenting. Nothing has changed otherwise. They are still moving forward with the divorce."

Speaking about the split, Kim has said: "I never thought I was lonely ... I always thought that's totally fine, I could just have my kids, my husband moves from state to state. And I just am on this ride with him, and I was okay with that, and then after turning 40 this year, I was like, 'No, I don't want a husband that lives in a completely different state to me.'