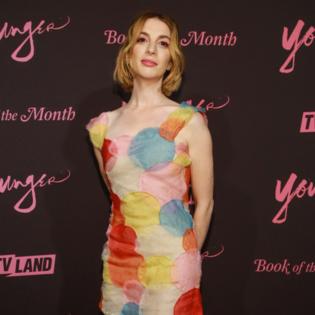 Molly Bernard has got married.

The 'Younger' actress tied the knot with her partner Hannah Lieberman - who she got engaged to in January 2020 - in a "perfect" ceremony at The Boathouse in Brooklyn, New York and admitted it is a "surreal joy" to have wed her "treasure".

Molly took to Instagram to share a photo from her big day, which showed her walking down a set of wooden stairs in a stunning wedding gown from WRAY NYC, while Hannah, wearing a Bindle & Keep suit, held her hand.

She captioned the post: "WIVES! Perfect day, perfect party. Perfect photo by @lesloups perfect couture dress by @wraynyc perfect custom suit for H by @bindleandkeep perfect fleurs by @fleurotica WHAT A SURREAL JOY TO BE MARRIED TO MY TREASURE!"

Molly had previously announced her engagement on Instagram, when she showed off her new ring, which featured a central diamond and a half halo.

Molly shared a photo of herself with Hannah and their dog Henry and captioned the post: "We said YES! [ring emoji] (sic)"

The 33-year-old star portrays pansexual publicist Lauren in 'Younger' and previously admitted the role helped her understand her own sexuality.

"I don't identify as straight."

At the time, she admitted she mainly dated men but felt it would be "perfectly possible and wonderful to have a [relationship with a] woman or trans person."

She added: "I've always felt this way, but now it's part of the conversation, we can talk about it. There's language for it."