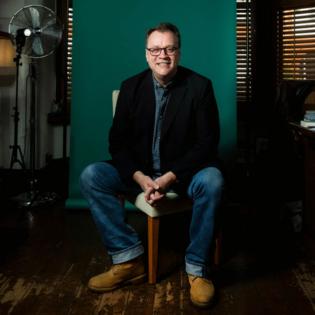 Russell T Davies is returning as 'Doctor Who' showrunner - 12 years after he stepped away from the series.

The 58-year-old screenwriter was responsible for bringing the sci-fi series back to screens in 2005 and he will return to helm the programme following the departure of current showrunner Chris Chibnall and Thirteenth Doctor Jodie Whittaker.

Russell will be responsible for overseeing 'Doctor Who' when it celebrates its 60th Anniversary in 2023 and beyond.

Speaking about his sensational return, Russell said: "I'm beyond excited to be back on my favourite show. But we're time-travelling too fast, there's a whole series of Jodie Whittaker's brilliant Doctor for me to enjoy, with my friend and hero Chris Chibnall at the helm - I'm still a viewer for now."

Commenting on Russell's appointment, Chibnall said: "It's monumentally exciting and fitting that Doctor Who's 60th anniversary will see one of Britain's screenwriting diamonds return home. Russell built the baton that is about to be handed back to him - 'Doctor Who', the BBC, the screen industry in Wales, and let's be honest everyone in the whole world, have so many reasons to be very excited indeed about what lies ahead."

After bringing 'Doctor Who' back to the BBC - 16 years after it was cancelled in 1989 - with Christopher Eccleston as the Ninth Doctor, Russell is credited with propelling the show into a global phenomenon and making it one of TV's biggest hits.

He replaced Eccleston with Tenth Doctor David Tennant and also created two successful spin off series, 'Torchwood' and 'The Sarah Jane Adventures' - which saw Elisabeth Sladen reprise her role as the beloved titular companion who travelled with Third Doctor Jon Pertwee and Fourth Doctor Tom Baker in the 1970s.

After departing the TARDIS in 2009, Russell has created some of the most acclaimed dramas on TV, including 'Years and Years', 'A Very English Scandal' and 'It's a Sin' - which focused on the AIDS epidemic in the 1980s and which recently won Best New Drama at the National TV Awards.

Speaking about Russell's return, Piers Wenger, BBC Director of Drama, said: "As the Thirteenth Doctor prepares to embark on new and extraordinary adventures, the winds of change are blowing … bringing with them news to delight 'Doctor Who' fans across the globe.

"We are thrilled that Russell is returning to 'Doctor Who' to build on the huge achievements of Chris and Jodie. Thank you to the two of them and the team in Cardiff for all they continue to do for the show and hello Russell, it's wonderful to have you back."