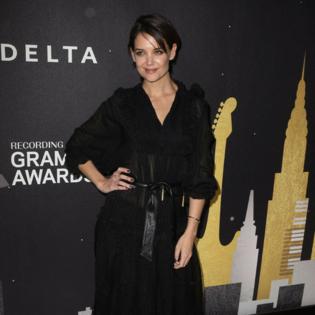 Katie Holmes is reportedly focused on being a director.

The 42-year-old star - who split from ex Emilio Vitolo Jr. earlier this year and has daughter Suri, 15, with ex-husband Tom Cruise - is said to be prioritising her career behind the camera rather than her love life, while she's spending the rest of her time at home.

A source told the National Enquirer: "She's focused on directing and meetings, and any downtime she has she spends at home.

"Katie's worn out by dating."

Katie is currently in post-production for her unnamed next project, which she will star in as well as writing, producing and directing the film.

Meanwhile, Katie previously admitted spending more time with her daughter amid the coronavirus pandemic has been "the most precious gift".

Lockdown rules stopped her from going to work and prevented Suri from attending school, which gave them more time together.

She said: "Hobbies such as sewing, painting and writing became new hallmarks of satisfaction and having had time at home to just be. To listen. To live for a moment in time without the pressure of results and instead appreciate the natural rhythms of mother and daughter was the most precious gift."

The 'Dawson's Creek' alum also admitted lockdown and the ongoing pandemic has been an "uncertain" time, and said she's kept her mental health in check by "remembering to be positive".

She added: "During this time of uncertainty, remembering to be creative and positive has been something I have tried to keep at the forefront of my mind. Throughout this experience the through-line for me has been a heightened awareness of each moment and really taking it in and appreciating it."

Katie didn't see her parents for several months during lockdown as she was unable to travel to Ohio to visit, and said the first time she saw them earlier this year was "like Christmas morning".

She explained: "My mom's eyes were brighter, my dad's hands even stronger and our hugs much tighter. Taking time in Washington Square Park with a friend whose little child was taking his first steps brought me back to when my own child began to walk. I felt nostalgic and in awe of the power of time and the continuation of life