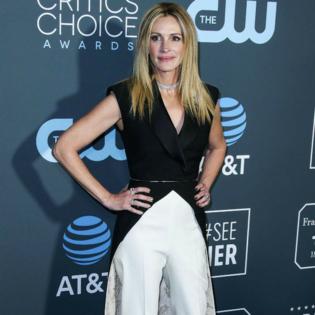 The 53-year-old actress - who starred alongside Hugh Grant in the 1999 romantic-comedy - praised the late filmmaker as "such a kind and gentle man".

She told E! News: "He always had a sweet grin on his face and a perfect piece of direction to share.

"I feel so fortunate to have had such a fantastic opportunity to work with him."

Julia also sent her condolences to "the true lights of his life", his children Harry, Rosie, Maggie and Sparrow.

Roger passed away on Wednesday (22.09.21), but his cause of death has not been revealed.

A statement from his publicist said: "It is with great sadness that the family of Roger Michell, director, writer and father of Harry, Rosie, Maggie and Sparrow, announce his death at the age of 65 on September 22."

Several other stars have paid tribute to the late filmmaker, including Samantha Morton.

She wrote on Twitter: "So incredibly sad to hear about the passing of Roger Michell, a wonderful director with huge integrity and compassion, in this world his kindness mattered so much to me. My thoughts and prayers are with his family. Thank you Roger for being so wonderful to us all. Enduring love… (sic)"

Sam Neill tweeted: "#RogerMichell. That lovely man. Died in his sleep last night . We the cast , with our director Roger, all tattooed a bird after shooting Blackbird- friends for life. Roger was only 65. We are all gutted. I grieve with his family. Great man. Vale Roger. Xx (sic)"

Sam Claflin posted: "Mr Michell - you really were one of the finest men I've ever had the privilege of working with. Patient. Kind. Loving. Sir, you will be missed. Love to your family. Love to all. Life is too short. #RogerMichell (sic)"

The Beatles are now on TikTok.

Fans of the iconic Liverpool band - which was comprised of the late John Lennon and George Harrison, and surviving members Sir Paul McCartney, 79, and Sir Ringo Starr, 81 - now have a choice...Read More

The sticksman was a member of the TCB Band, the core rhythm section of the late King of Rock and Roll's band, from August 1969 until the 'Hound Dog' hitmaker's death...Read More

Ryan Reynolds has claimed he's planning to take a "little sabbatical from movie-making".

Adele is reportedly in talks for a one-off concert at The Encore Theatre at Wynn in Las Vegas.

The 33-year-old singer made her long-awaited comeback with the brand new single 'Easy On Me' this week.

And after it was ...Read More

Prince Charles is "very proud" of his son, Prince William, for his "growing commitment" to protecting the planet.

The 72-year-old royal - who is first in line to the British throne - has heaped praise on his 39-year-old ...Read More

Jason Isaacs cries at "everything".

The 'Operation Mincemeat' actor admitted people quickly realise he's nothing like the tough guys he's depicted on screen once they meet him and spend a few minutes in his company.