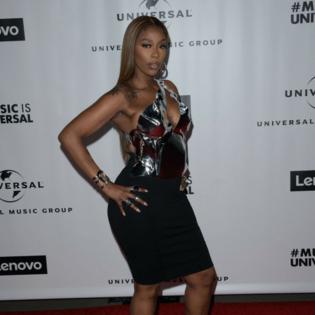 The rapper feels "so overwhelmed with joy" about expecting her first child, and she has thanked God for "blessing" her with a baby.

She wrote on Instagram: "The Lord just keep on blessing me! Look it's a baby in there and today it's the bmf premiere. I'm so overwhelmed with joy. #divineorder #Godstiming (sic)"

Kash - whose real name is Arkeisha Antoinette Knight - announced the news on Thursday (23.09.21), and she shared a maternity photoshoot to show off her baby bump.

Several of the star's friends congratulated her on her baby news.

Kash - who has previously collaborated with the likes of Lil' Wayne, Big Sean, and Iggy Azalea - also made her debut on 50 Cent's STARZ drama series 'BMF' on Thursday.

50 Cent confirmed in March that Kash was part of the cast.

He said: "A lot of them put themselves on tape for the characters.

"They got the sides and read it until they were comfortable then performed it to tape and sent it in.

"We went through them and tried to sort out the right combination by putting all of the actors together ... we even have Kash Doll on 'BMF'."

The Beatles are now on TikTok.

Fans of the iconic Liverpool band - which was comprised of the late John Lennon and George Harrison, and surviving members Sir Paul McCartney, 79, and Sir Ringo Starr, 81 - now have a choice...Read More

The sticksman was a member of the TCB Band, the core rhythm section of the late King of Rock and Roll's band, from August 1969 until the 'Hound Dog' hitmaker's death...Read More

Ryan Reynolds has claimed he's planning to take a "little sabbatical from movie-making".

Adele is reportedly in talks for a one-off concert at The Encore Theatre at Wynn in Las Vegas.

The 33-year-old singer made her long-awaited comeback with the brand new single 'Easy On Me' this week.

And after it was ...Read More

Prince Charles is "very proud" of his son, Prince William, for his "growing commitment" to protecting the planet.

The 72-year-old royal - who is first in line to the British throne - has heaped praise on his 39-year-old ...Read More

Jason Isaacs cries at "everything".

The 'Operation Mincemeat' actor admitted people quickly realise he's nothing like the tough guys he's depicted on screen once they meet him and spend a few minutes in his company.