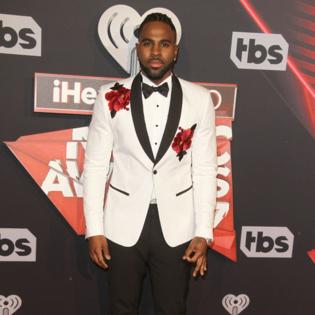 The 31-year-old singer began romancing Jena in 2020 and the pair welcomed a son named Jason King into the world in May this year, but it seems their love wasn't meant to last as they've called it quits.

Jason confirmed the news on Twitter, where he said he and Jena are separating in order to "be the best versions" of themselves as they can be for their son.

He wrote: "Jena and I have decided to part ways.

"She is an amazing mother but we feel being apart at this time will allow us to be the best versions of ourselves and the best parents we could be. Pls respect our privacy in this time. (sic)"

The news comes just two months after Jason heaped praise on Jena in July, calling her an "incredible" mother.

He said at the time: "The biggest challenge definitely is the waking up. Sometimes I wake up with one eye and I'm like, I don't know how she's doing it. Jena's been a superhero in all of this, so I've been very, very lucky. She's really incredible with him, and she is definitely the ringleader in all of this. My hat goes out to her."

Meanwhile, Jason revealed in December he was loving having Jena live with him during the COVID-19 pandemic.

He had explained: "It kind of solidifies things when you're spending that much time around somebody. You either love it or you hate it.

"But it's been pretty great and a lot of fun, so I'm enjoying it. We were born on the same day, so we're so similar.

"My mum hasn't met her yet - she's only met her over the phone so we'll be going to Miami soon for that to happen."

The 22-year-old daughter of late 'Fast and Furious' franchise star got married to her actor fiance on Friday (22.10.21) in a touching ...Read More

Simone Ashley says Phoebe Dynevor has been "so supportive" to her on the set of 'Bridgerton'.

The 26-year-old actress is set to star as Kate Sharma in the second season of the Netflix period drama, and has heaped praise ...Read More

The 25-year-old actress and singer has revealed she's had a change of heart when it comes to being open and public with her relationships ...Read More

The prop gun which Alec Baldwin fired on the set of 'Rust' allegedly contained a "live round", according to the Prop Masters Union.

Alec accidentally shot and killed cinematographer Halyna Hutchins while on set of the ...Read More

Halyna Hutchins' husband has said Alec Baldwin has been "very supportive" after the cinematographer was fatally shot by the actor in a horrific accident on the set of his new movie, 'Rust'.

The 42-year-old director of ...Read More

The 48-year-old actress revealed this week she had an IQ test as a child that confirmed she had a "very high" IQ of 152, but said it had "...Read More