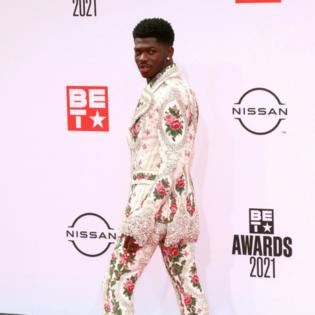 The 22-year-old rapper has revealed to fans on Twitter that he has an incomplete track that he wanted to send to the 'Born This Way' hitmaker to see if she fancied adding her vocals to it.

Asked by one follower if he'd ever do a collaboration with the 35-year-old megastar, he replied: "Yes i actually wanted a song with her on the album but i never finished writing to it & sending it to her. (sic)"

The 'Old Town Road' hitmaker also revealed that he sent Nicki Minaj 'Industry Baby' - which was co-produced by Kanye West - from the LP to ask her to drop a verse.

Asked to name the track he sent to the 38-year-old rap star, he responded: "industry baby (sic)."

Jack Harlow ended up dropping a verse on the song.

Nas X also let slip during the Q&A that he has an unfinished track called 'My Little Baby' featured on the upcoming deluxe edition of his debut studio album.

Meanwhile, the Grammy-winner vowed this week to release a "banger bop" with Lizzo.

The music star has promised that a collaboration between him and the 'Good As Hell' hitmaker, 33, is "definitely going to happen".

Speaking on BBC Radio 1's Live Lounge, he spilled: "I was actually talking to Lizzo a few weeks ago [about this]. I feel that it's definitely going to happen.

"It's going to be a banger bop, everyone's going to love it and [Radio 1 is] going to play it three billion times."

The pair struck up a close friendship after their success at the 2020 Grammys and even went out celebrating at a strip club together.

When asked what his highlight of the prestigious awards ceremony was, he previously spilled: "Probably when I went to the strip club with Lizzo. That was a pretty great time. They were playing our songs and stripping. It was a crazy night."

The 'Rodeo' star also pleaded with Rihanna to get in the studio with him.

He said: "I'm feeling Rihanna right now. Rihanna, get in this damn studio."

Nas X recently revealed he wants to recruit the 'Diamonds' hitmaker and Puerto Rican star Bad Bunny for a remix of 'Montero (Call Me By Your Name)'.

Britney Spears' family hurt her "deeper than you'll ever know."

The 'Oops I Did It Again" hitmaker recently saw her father removed from his position as co-conservator of her estate and is hoping to have the legal ...Read More

The 26-year-old star has revealed she's stepping back from social media following the tragic ...Read More

The former 'Keeping Up With the Kardashians' star's security team called police on 19 October after detaining Nicholas Costanza for trespassing at...Read More

The 35-year-old actress - who has four-year-old daughter Nina and an 11-month-old son with husband Thomas Sadoski - revealed "...Read More

Travis Barker has had Kourtney Kardashian's lips inked to his arm.

The heavily tattooed Blink-182 star proposed to the 'Keeping Up with the Kardashians' star earlier this month, and he's just had an old tattoo tribute to ...Read More

The Kardashian and Jenner clan's iconic reality TV series 'Keeping Up with the Kardashians' ended after 14 years and 20 ...Read More