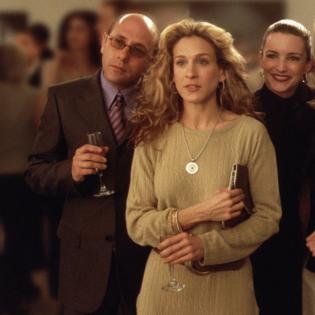 The 56-year-old actress has been left devastated by the death of her 'Sex and the City' co-star - who played her character Carrie Bradshaw's best friend Stanford Blatch in the HBO series and subsequent spin-off movies - and she can't face writing a tribute to him just yet.

Willie died on Tuesday (21.09.21) aged 57 following a short illness, and the majority of the cast have shared touching tributes on social media, including Chris Noth (Mr. Big), who simply posted: "Willie", with a love heart and heartbroken emoji.

The 56-year-old actress hailed the 'White Collar' actor "smart and funny", as she reflected on the decades that they have known one another.

She wrote on Instagram: "I first met Willie in 1995 on the spooky nighttime set of 'The X-files'. He immediately made me laugh.

"Little did I know that we would have the joy of sharing 'Sex and the City' + 'And Just Like That' together. Willie is beloved by our entire community. He was smarter and funnier than you ever would have imagined. We are bereft without him."

Kristin has two adopted children, Gemma and Wilson, and she bonded with Willie - who adopted Nathen, now 20, in 2009 - over their shared experience of single parenthood.

She added: "I really want to pay tribute to his fearless commitment to single fatherhood.

"We spoke about being single parents through adoption often. And nothing gave him more joy and pride than his son Nathen. Nathen's strength and wisdom beyond his years are evident in his beautiful tribute to his dad.

"The outpouring of love is earned dear Willie. I am thankful for all of the time we had and grateful that so much of your bright light is on film forever. Maybe we can do our pod cast the next time around ? We love you forever xoxo.(sic)"

Nathen previously shared a touching tribute to his father on Instagram.

He wrote: "I love you so much papa. Rest In Peace and I'm so glad you got to share all your adventures with me and were able to accomplish so much.

"I'm so proud of you. I will always love you, but I think it's time for you to go on an adventure of your own. You'll always be with me. Love you more than you will ever know and I'm glad you can be at peace now. You always were the toughest and funniest and smartest person I've known.

"I'm glad you shared you're love with me. I'll never forget it or lose it."

Rebecca Hall has entered a "f*** it" phase in her life.

The 39-year-old actress has turned her hand to directing and started a new chapter in her life, after previously facing so many frustrations.

Speaking about her ...Read More

The Royal Family have been rallying around Queen Elizabeth amid her health concerns.

The 95-year-old monarch recently spent a night in hospital after undergoing a "preliminary" health check, and her family - including ...Read More

ABBA were treated like "enemies" in Sweden during their heyday.

A 20-foot black heart has been erected in Camden to mark the 15th anniversary of the late Amy Winehouse's iconic 'Back to Black' album.

The 74-year-old music legend is set to bow out of touring after he completes the rest of his 'Farewell Yellow Brick Road: The Final Tour', which has been postponed ...Read More

Kathryn Hahn will no longer be playing Joan Rivers in 'The Comeback Girl'.

The 48-year-old actress was originally cast as the legendary stand-up comic - who died in 2014, aged 81 - in the limited series, but the ...Read More