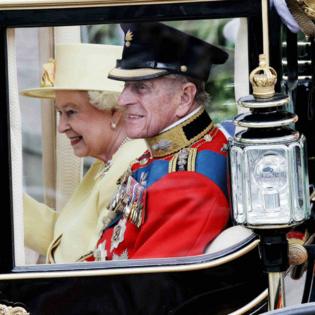 The monarch and her late husband - who died in April aged 99 - couldn't help but see the funny side when things didn't run smoothly and would find it "exciting" if something didn't go according to plan.

Speaking in documentary 'Prince Philip: The Royal Family Remembers', which aired on Wednesday (22.09.21) on BBC One, Prince William said of his late grandfather: "He enjoys playing practical jokes and foolery. He loved when things go wrong.

And in a separate interview, the Duke of Cambridge's brother, Prince Harry, agreed.

He said: "I think there is an imbalance of there is everyone doing everything like, 'The Duke of Edinburgh is coming, let's make sure we get everything absolutely right. Remember every single year we've got it right, let's do that.'

'But the two of them are going, 'I wonder if something is going to go wrong this year. How exciting.'

"What I remember now is the expressions on his face to the things that went wrong. He would just sit there completely calmly and just watch us run by."

And Philip's grandchildren recalled how the Duke of Edinburgh used humour to put people at ease and was very quick-witted.

A woman selected to be a juror in Jussie Smollett's hate crime trial was dismissed after she admitted she wouldn't be able to fairly judge the case - because her daughter is gay.

Prince Charles has described slavery as an "appalling atrocity" and something "which forever stains our history".

The British royal - who was speaking during the ceremony marking Barbados' transition to a republic - ...Read More

Jimmy Kimmel jokes he'd be "bald" if he hadn't been wearing a hat during his Thanksgiving accident.

Marilyn Manson's home was raided by police in connection to an investigation into sexual assault allegations.

The 'Ghostbusters: Afterlife' co-writers - who worked together on the script for the reboot, which Reitman directed - have ...Read More

Jared Leto has joked he "snorted lines of arrabbiata sauce" for his role in 'House of Gucci'.

The 49-year-old actor - who starred as Paolo Gucci, vice president of the fashion brand, in the new movie - has claimed he was ...Read More