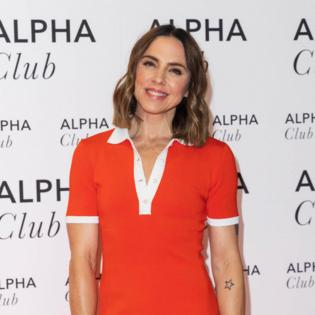 Mel C danced to Spice Girls classic 'Wannabe' as she made her 'Dancing with the Stars' debut on Monday night (20.09.21).

The celebrity dance contest returned to screens with a bang last night, with Sporty Spice taking to the dancefloor to perform a sizzling Cha-Cha-Cha to her own 90s classic with her dance partner Gleb Savchenko.

The pair scored 27 points out of 40 from the judging panel for their first routine.

The 47-year-old singer had hinted she might get to dance to one of the girl group's hits on the show.

She said: "It's going to be lovely for me to have this opportunity to just be back in the US, and kind of remind people about the Spice Girls.

JoJo Siwa made history in the show's first same-sex pairing.

The 18-year-old YouTube personality and professional dancer Jenna Johnson Quickstepped their way to the top of the leaderboard with a score of 29 out of 40 points.

JoJo said: "It was so cool! I didn't know when it happened!

"When Tyra said it was the highest score of the night, I lost it."

The former 'Dance Moms' star - who came out as a member of the LGBTQ+ community earlier this year and is dating Kylie Prew - recently admitted she was "proud" to be making history with her appearance.

She said: "When I read the email it was like, 'Would JoJo prefer to dance with a girl or with a boy?' And I was like, 'Wait, that's an option? Let's absolutely do it!'

"It was a like, 'Whoa, I'm changing the future' [moment], because I have such a kid demographic. It's making it acceptable, and I love that and I'm so proud of that."

Elsewhere, Amanda Kloots wowed with a show-stopping Tango with Alan Bersten, for which the pair scored 28 out of 40.

Len Goodman returned as head judge, joining Carrie Ann Inaba, Bruno Tonioli and Derek Hough on the panel, while Tyra Banks was back as host of the show.

Bryan Adams has confirmed he is "symptomatic" of COVID-19 - but is "on the mend".

The 'Heaven' hitmaker, 62, went to the hospital in Milan, Italy, after getting a second positive coronavirus test result, and later ...Read More

The 31-year-old reality star recently walked out on her fiance - who she got engaged to three years ago and has eight-month-...Read More

The Hollywood actress was diagnosed with the autoimmune disease MS - which affects the central nervous system - earlier this year, and ...Read More

The 'Deadpool' star took to Instagram to share a video of his reaction to former Barenaked Ladies ...Read More

Gary Oldman allegedly slept in a coffin "every night" to prepare for his portrayal of Count Dracula.