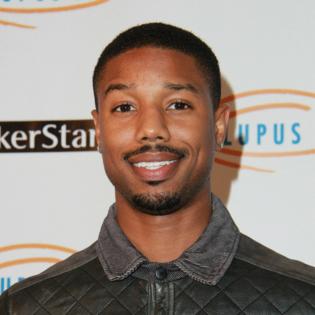 Michael B.Jordan's relationship has the seal of approval from his girlfriend's dad.

The 'Black Panther' star confirmed he was dating Lori Harvey on Instagram in January and now her father, comedian Steve Harvey has heaped praise on the actor, saying it's the first time she's been happy in a relationship.

Speaking to People, the 64-year-old 'Family Feud' host said: "I don't speak publicly about this type of stuff, but I'm happy for my daughter right now.

"It's the first time I've been happy for her [in a relationship].

" And it's the first time she's been happy."

Before he praised "good guy" Michael.

"But I can't say nothing bad, man.

The 48-year-old actress has revealed her mother, Judy Loe, had her brain power tested when she was a child and found her IQ to be at 152 - which is considered to be "very high" - ...Read More

Adele is reportedly set to introduce Rich Paul to her family next month.

The 33-year-old singer went public with the sports agent in July when they were spotted at a basketball game together, and it has now been claimed ...Read More

Dame Helen Mirren has been named an Ambassador of the University of Salento.

The 76-year-old actress was thrilled to be given the honorary position at the school in Lecce, Italy, on Thursday (21.10.21), which was awarded ...Read More

Kristen Bell has "never been more in love" with Dax Shepard than when he sucked out her clogged milk duct.

The 'Frozen II' star has two daughters - Lincoln, eight, and Delta, six - with her husband Dax, and has opened up ...Read More

The 38-year-old model is mother to 10-year-old son Flynn, whom she has with her ex-husband Orlando Bloom, and sons Hart, three, and Myles, two, with her current ...Read More