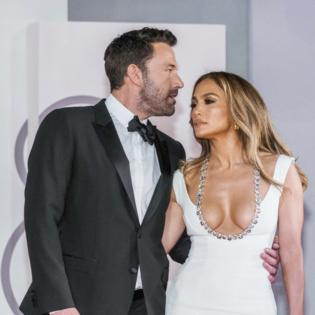 Ben Affleck has praised girlfriend Jennifer Lopez for her "effect on the world".

The 48-year-old actor says he's in "awe" of his partner who he "can only stand by and admire with respect".

Speaking to AdWeek, he gushed: "All I can tell you is that I have seen first hand the difference representation makes because I have seen, over and over and over and over, women of colour approach Jennifer and tell her what her example as a strong woman and a woman succeeding and demanding her fair share in the business world means to them.

He added: "I am in awe of what Jennifer's effect on the world is.

"At most, as an artist, I can make movies that move people.

"Jennifer has inspired a massive group of people to feel they have a seat at the table in this country.

"That is an effect few people throughout history have had, one I will never know and one I can only stand by and admire with respect."

The 'Stillwater' star suggested there's "no-one" who wants to see Ben's romance with Jennifer go the distance more than him, as he really wants them both to be "happy".

When asked if he thought Ben and Jennifer would make it, he told 'The Carlos Watson Show': "Oh man, no one's pulling harder than I am.

Selma Blair "feels like a new person" after getting stem cell treatment for her MS.

The 49-year-old actress was diagnosed with multiple sclerosis in 2018, and by 2019, her symptoms had worsened so much she was unable to ...Read More

The 'Euphoria' star has said taking time away from posting on Twitter and Instagram helps her keep her mental health in check, because she can get easily anxious or "...Read More

Kris Jenner feels "lucky" to have Kim Kardashian West in her life, as she marks her daughter's 41st birthday.

The Kardashian family matriarch took to Instagram on Thursday (21.10.21) morning to be one of the first people ...Read More

The 'Muppets' actor has revealed that his two sons have no idea what their dad does for a living.

The 52-year-old star - who has a seven-year-old son and a four-year-...Read More

The singer-turned-designer has been married to husband David Beckham since 1999 - but Victoria has insisted she won't be giving any tips to her 22-year-old...Read More

The 77-year-old actor - who portrays Player 001 in the Netflix show - admits he can barely believe the extent of its success and ...Read More