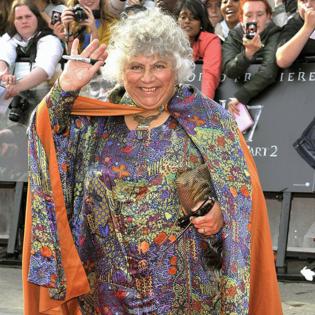 The 80-year-old actress has starred on stage and screen for decades, but Miriam still doesn't understand her celebrity status.

The Cambridge-educated star - who is well-known for her larger-than-life personality - reflected: "Did you know, people describe me now as a celebrity? I don't feel like a celebrity at all, I just feel like an intelligent old lady.

"But it's funny when people, you know, 'cluster'. When I went for an injection in my spine on Tuesday, all the nurses were very kind and excitable. I suppose they either know me from 'Harry Potter' or 'Blackadder'. And some might know me from 'Dickens' Women', which is my one-woman show, or 'Call the Midwife', or the documentaries or films or 'Graham Norton' of course.

"I've had a curious career, I suppose."

Miriam now feels a sense of "impending doom" because of her age - but she's determined to remain upbeat about life.

Speaking about her memoir, Miriam told the Observer newspaper: "[A memoir is] the obituary that you write yourself.

"I am feeling alive at the moment. But when you are old you know you're going to die, and probably quite soon. We, those of us who are old, well, it's the tunnel that there's no light at the end of. But I'm certainly not over. And I won't be bullied by death."

Miriam acknowledges that she's nearer the end of her life than the start. But she won't allow the doom to "crowd out the joy".

She said: "I do feel a sense of impending doom. I'd be nuts if I didn't. The trick is, not to let it crowd out the joy."