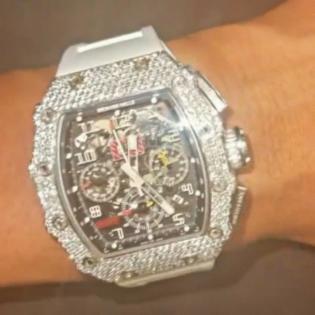 The 26-year-old rap star has taken to Instagram to voice his anger towards New York City jeweller Rafaello and Co, after the company sold him a fake Patek Philippe watch for an eye-watering amount of money.

Alongside a video clip of his sparkling watch and four dazzling rings, he wrote on Instagram: "Now @rafaelloandco y'all Kno better then to sell ME of all people a FAKE Or anything that could be called a FAKE ! I stand on my name the same way y'all should ! Ain't no such thing as a mistake when that money involved !! Don't F***** Play Wit me Cause when I'm on that I'm on that (sic)"

Rafaello and Co has previously supplied jewelry to the likes of J Balvin and Travis Scott.

The company has already taken to social media to discuss Lil Baby's accusations, admitting to selling the rap star a fake watch but insisting it was an honest mistake.

In a message posted on Rafaello and Co's Instagram Story, the company explained: "We do stand on our name just like he does that's why today he got those four rings for free and his money back because we didn't do our homework on the watch and we take full responsibility for that. But it didn't happen intentionally and he knows that for a fact."

The issue came to light when a jewellery verification page pointed it out on social media.

Lil Baby - whose real name is Dominique Jones - wrote online: "@patekphillipe see this why I need to be on the list!!! After market jewelers going to make me do something I shouldn't be doing. (sic)"