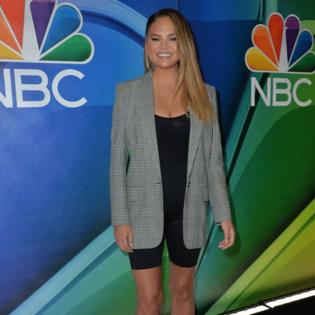 Chrissy Teigen's body got "stuck" after she lost her baby.

The 'Lip Sync Battle' star and her husband John Legend were left devastated when they lost their son Jack 20 weeks into the brunette beauty's pregnancy, and she has admitted her "diabolical" sadness was made harder by the "daily reminder" of her physical changes and biological responses.

Chrissy - who also has children Luna, five, and three-year-old Miles with her spouse - reflected on Instagram: "it's really weird when you lose a baby and your body gets paused in time. usually you'd gain your "yumyums I'm praaaagnant!" weight, then put on the weight of your little bebe. Then, ideally, you'd have your baby.

"And you would feed it from your boobs and your body would know to charge through and do what it does to get you back into fighting shape, whatever that may be, for however long it takes (F*** a snap-back)…

"But man. When you lose a baby halfway through, your body just pauses. It has nothing to do. No one to feed. And you're just…stuck. Stuck with saggy boobs that were prepping to be milk bags, a belly that was ready to bake.

"I would be lying if I said this did not majorly suck. Not only are you ummmm extremely, diabolically sad at what could have been, but you have this daily reminder every time you look in the goddamn mirror.(sic)"

The 35-year-old star admitted she had no "positive words" about the situation but insisted she wasn't looking for messages of consolation.

She concluded: "I don't really have a big ending or positive words lol. And don't say nice things!! I know I know I promise. I know it's not everything and I know i'm suuuuuch a badass and blah blah blah I just thought I'd be emo for a minute ok! I love you. f*** a scale!(sic)"