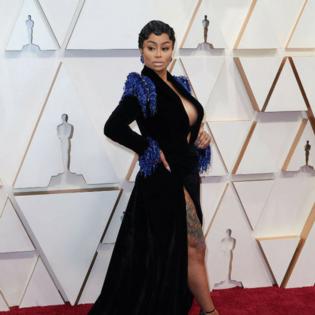 Blac Chyna has given her opinion on the split between Kim Kardashian West and Kanye West, insisting as "long as they do what's right for the kids" nothing else matters.

The 33-year-old model - who was engaged to Kim's brother Rob Kardashian, with whom she has daughter Dream Renee Kardashian, four - insists the estranged couple should do whatever think is right for them, because everyone involved has the right to happiness.

"I don't feel like anybody should be in a place where they're not happy. I feel like everybody deserves to be happy. And that's just that.

"The kids ... let that be the main focus. That's what I feel about that. Co-parent and just live and just be happy.

"Just be happy and be at peace. That is everything."

When asked whether she wanted to have more kids herself, Blac - who appeared on 'Keeping Up on the Kardashians' when she was in a relationship with Rob - was very sure of her answer.

Blac - real name Angela Renee White - said: "Absolutely. I got to make some more money though!"

On the topic of money, the socialite - who launched makeup line Lashed by Blac Chyna in 2014 - was also keen to clear up any misconceptions that she is a "golddigger".

She said: "What's the perceptions? That I'm a gold digger. What else? I don't work hard. What? That I don't do anything. Honestly like everything that I have, like, I work super hard for."

The businesswoman also revealed that she would be unlikely to take advice from head of the Kardashian empire, Kris Jenner, 65.

She said: "No. [I wouldn't take advice from Kris]. I'm a businesswoman and I got mine honestly, like off the floor, like from the ground up from the mud,, you know what I mean?"

Watch Blac Chyna's full interview on 'Behind The Velvet Rope with David Yontef' on YouTube.

The 56-year-old actor was feeling suicidal before he landed the role of Boris Grishenko, a geeky computer programmer, in the James Bond film 'GoldenEye', and he looks back...Read More

Megan Thee Stallion is set to graduate from college.

The 26-year-old rap star has taken to her Instagram account to reveal she's on the cusp of graduating, after studying for her degree in health administration at Texas ...Read More

Sheryl Crow is reminded by her kids that she's not a "cool mom" anymore.

The 59-year-old musician has adopted sons Levi, 11, and Wyatt, 14, and Sheryl has joked that her kids are unimpressed by her fame and success.

'Succession' has been renewed for a fourth season.

The HBO series has been a huge hit with TV viewers since premiering in 2018, and the broadcaster has now announced plans to commission the show for another season.