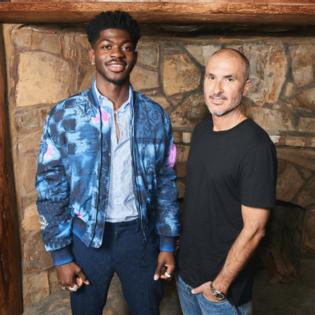 Lil Nas X was convinced he was "going to die" when he got famous.

The 22-year-old star went though a period of anxiety when he first started making music, which escalated when his single 'Old Town Road' became a global hit, but he credits his career for ultimately providing a distraction to allow his worst thoughts to subside.

Speaking to Zane Lowe on Apple Music 1, he said: "The entire time I was making music, I thought soon I was going to die for some reason. Worst anxiety period.

"You know, I lost my grandmother and was the first person that was close to me that I had ever lost. I was like, 'Oh my God, everything's building up.' And then especially when 'Old Town Road blew up'. I was like, 'Oh, I'm definitely dying soon.' All of these artists that were coming into, or starting to pop into the music industry were passing away, I was like, 'What the f*** is happening?'

"I guess I tried to ignore it until it went away. And then that's when I found belief in the universe, for sure. And I was like, 'Oh my God, I'm really not alone in this.'

"That's another thing music was for me though. It was something I love, but it was also a distraction from those thoughts. It's like, oh, those thoughts, here's the song guys."

Nas came out as gay publicly in June 2019 and he admitted he expected some people to be "shocked" by the admission.

He said: "I knew some people would be shocked. Because a lot of people, when they hear a song, they maybe look up the artist and don't think much don't, don't get too involved into your life or what they're talking about, or their captions or what they're posting on their story or whatnot. So then it's just like, 'Wait, what the.'

"Because there's a lot of songs I like right now and I've seen the artist's face, but I have no idea about them outside of that. So that's how it was for... It was like, 'Oh, this cowboy country? Wait, huh? How's that possible?'"

The 'Montero (Call Me By Your Name)' hitmaker feels a sense of "responsibility" and wants to put in "even more effort" to push boundaries because of his sexuality.

He added: "I feel responsibility. I don't know if I want to say a lot, but it's certain things that I see in the world that fuel me to go harder or put even more effort, or to make sure I'm getting across.

"Because I feel like, I said this before in the past, when people come out as gay or whatnot, it becomes like, 'OK, let's sanitise the hell out of this. Let's make sure it's appropriate and super safe.''

"And it's like where they don't do anything that's considered too far, even the things that we see other artists doing. And even to defend ourselves… I feel like we still haven't reached a place where I can do something right now that no straight person has done that's considered too far. Because then, it's really too far because no straight person has done it yet. You know what I'm saying?"

Watch the interview in full on Apple Music at apple.co/_MONTEROInterview.

Cardi B's new line of whipped cream sold out within minutes of going on sale.

The 20-year-old star and Scott, 38, called time on their romance earlier this year, and Harry Hamlin - Amelia's dad - is glad that she's now "solo".

Alec Baldwin "didn't pull the trigger" on the gun that killed Halyna Hutchins.

The cinematographer was shot on the set of the movie 'Rust' on October 21 - but Alec has insisted he didn't pull the trigger.

In a preview of...Read More