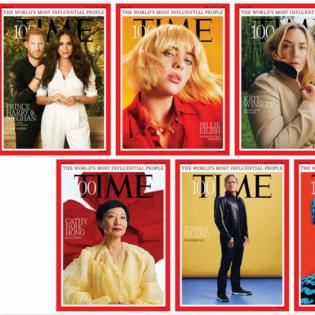 Miley Cyrus idolises Dolly Parton because of her "steadfast morals and values".

The 'Wrecking Ball' hitmaker has praised her godmother for both her "incomparable career" and her humanitarian work and insisted it's easy to understand why she is a role model for so many people.

Writing in praise of Dolly for Time magazine's annual list of the 100 most influential people, she said: "Have you ever met anyone who doesn't love Dolly Parton? I never have.

"Dolly is not only my idol because of her incomparable career--she's also my role model because of her steadfast morals and values. At her core, she is the definition of a humanitarian. She's also the world's most impeccably purposeful walking contradiction, having developed her iconic look after being inspired by the town tramp. Now she's known as a saintly, even godlike, figure...

"But though she created an identity that she downplays as being built on wigs, lots of gingham and silicone, the foundation for this empire is actually her honesty, truth and her faith. People look to Dolly for guidance, and she knows that.

"She wears that responsibility with the same grace and pride she rocks a two-piece Nudie suit. She recognizes how impactful her choices will be as one of the most iconic and powerful voices in country music, and she leaves no one behind. Dolly has diligently celebrated the queer community and her Imagination Library provides millions of books for kids. (The only thing Dolly loves more than glitter is children.)"

The 28-year-old singer went on to praise the '9 to 5' hitmaker's donation to coronavirus vaccine research and how important that has been for the music industry.

She wrote: "Last year, she donated $1 million to COVID-19 vaccine research, which helped in critical early stages. There's a multitude of reasons why vaccination is important to protect other people. But it's also to get the show back on the road and bring live music to our audiences again."

And Miley admitted she wished everyone was able to meet her "fairy godmother".

She concluded: "There's a theory that you shouldn't meet your heroes, but I wish everyone had the chance to meet Dolly Parton, because she's even better than your sparkliest dreams. She may be my fairy godmother, but I think she's that to everyone else too. I am happy to share her with the world."

Corey Feldman's prosthetic ear from 'Stand By Me' is set to go under the hammer.

The 50-year-old actor's character in the 1986 coming-of-age drama, Teddy Duchamp, had his ear burned off when his father shoved his head ...Read More

BTS star V will be performing sat down at their 'Permission to Dance' show after injuring his leg.

The K-Pop megastars are due to host the online concert later today (24.10.21), and after going to the hospital with ...Read More

Izzy Judd has no issues with being "outnumbered" by boys in her family.

The 37-year-old violinist gave birth to her second son, Lockie, with her McFly rocker husband Harry Judd - with whom she also has Lola, five, and ...Read More

The Duke and Duchess of Cambridge hosted the delayed function to mark the unveiling of the bronze tribute to the royal...Read More