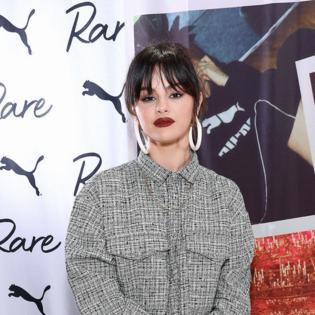 Selena Gomez got a new piercing after failing to buy a teddy bear.

The 'Heart Wants What It Wants' singer was out for dinner with Indie girl group Girl Pool - which comprises of Avery Tucker and Harmony Tividad - when the group decided to head to the Build-a-Bear workshop in a local mall, only for their plans to go awry when they couldn't find the store.

In a TikTok video, Selena said: "I'm gonna tell you why. Nobody does this anymore. Like, going to get a Build-a-Bear is a huge deal, and we're not kids. We're like, 'What does this inspire us to do?' That's what we're doing."

Instead, the trio opted to head to a piercing store instead, where the 29-year-old star had a small piece of jewellery put into her upper ear.

Selena captioned the post: "We tried to go to build a bear but couldn't find it at the galleria so we went and got piercings instead"."

In the video, she swept back her hair to reveal the new piercing, which appeared to be a small hoop.

She quipped: "Got something right here!"

Meanwhile, one of her friends opted for a belly button ring, and the three posed for a selfie to celebrate their new look.

Fans responded positively to the new look, as one wrote: "Friends who get piercings together stay together" whilst another commented: "This is everything I need in a friend group and more."

It is the latest in a series of dramatic style shake-ups for the 'Wolves' hitmaker, who temporarily up her famous brunette locks for platinum blonde back in April, before ultimately going back to brown.

She previously said: "I felt like I could do crazy things with my hair or try new looks with my makeup. It was just so much fun … I felt so cool and edgy."

Corey Feldman's prosthetic ear from 'Stand By Me' is set to go under the hammer.

The 50-year-old actor's character in the 1986 coming-of-age drama, Teddy Duchamp, had his ear burned off when his father shoved his head ...Read More

BTS star V will be performing sat down at their 'Permission to Dance' show after injuring his leg.

The K-Pop megastars are due to host the online concert later today (24.10.21), and after going to the hospital with ...Read More

Izzy Judd has no issues with being "outnumbered" by boys in her family.

The 37-year-old violinist gave birth to her second son, Lockie, with her McFly rocker husband Harry Judd - with whom she also has Lola, five, and ...Read More

The Duke and Duchess of Cambridge hosted the delayed function to mark the unveiling of the bronze tribute to the royal...Read More