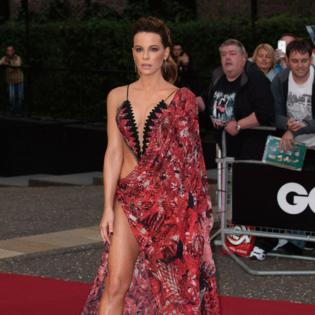 Kate Beckinsale has admitted she'd love to finish her degree at Oxford University.

The 48-year-old actress - who had enrolled at New College to study French and Russian literature, but dropped out in her second year - has opened up on the circumstances around her deciding not to go back.

Asked if she'd like to return, she told the Daily Mail newspaper's Eden Confidential column: "Yes... My friends were party people and I wasn't.

"They'd all moved into a house and I stayed in the college, where I then got mono [infectious mononucleosis, or glandular fever], and went home.

"While I was home, one of my dear friends there ended up jumping out of a window and dying. All my other friends were rusticated -- basically expelled for a year and then you come back."

However, when Kate thought about returning, she admitted the death still haunted her.

She added: "When I was considering going back, nobody was there and there was this horrible whiff of death everywhere. That was the reason I didn't go back."

She recently returned to the university with her 22-year-old daughter Lily - whom she has with her ex Michael Sheen - and discovered the option is still there for her return.

She said: "I took my kid to my college and my French tutor was still there. She said, 'You know you can come back any time?' "

Kate originally started pursuing her interest in acting when she was just 15, but when she was in her early 30s she found herself lamenting her chosen career path as she thinks she'd have made a "good" doctor because people often ask her for advice.

"I retain medical things. I feel like I'd be quite good. Listen, what I am is an actress who people phone up and say, 'I think I might have a haemorrhoid.' I can't tell you the amount of times people come to me.

"I'm obviously not going to perform a digital rectal exam, but I will go through symptoms. So far, touch wood, it has only ever really been chafing. Should you get any chafing, call me."

The 'Rocket Man' hitmaker - who has worked with his long-time songwriting partner Bernie Taupin for five decades - has teamed up with the 29-...Read More

The Slipknot and Stone Sour frontman has hailed the Kurt Cobain-fronted Grunge pioneers' iconic 1991 LP ahead of its 30th ...Read More

Dame Judi Dench was persuaded to take a role in 'James Bond' by her late husband.

The 86-year-old actress played M across seven Bond movies between 1995 and 2012 and revealed that she would never have taken the part had ...Read More

Melvin Van Peebles has died at the age of 89.

The influential filmmaker was described as the "godfather of black cinema" and is known for his 1970s pictures 'Watermelon Man' and 'Sweet Sweetback's Baadasssss Song'.

The 63-year-old actor will star in and executive produce the upcoming LGBTQIA+ empowerment tale that is set at a gay conversion camp and also ...Read More