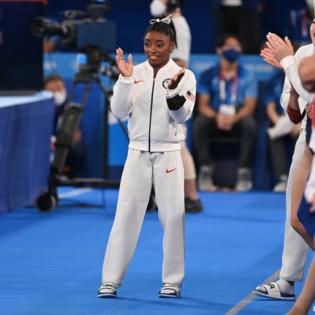 Simone Biles has thanked her fans for the "outpouring love and support" she has received after she pulled out of two Olympic events to focus on her mental health.

The 24-year-old gymnast dropped out of both the women's team final and the women's individual all-round final at Tokyo 2020 this week, and thanks to the overwhelming positive response to her decision the star has realized she is "more than my accomplishments and gymnastics".

She wrote on Twitter: "the outpouring love & support I've received has made me realize I'm more than my accomplishments and gymnastics which I never truly believed before. (sic)"

Simone - won four gold medals for team USA at the 2016 Olympics in Rio - will undergo daily evaluations to determine whether she'll return for her remaining events next week.

USA Gymnastics said in a statement: "After further medical evaluation, Simone Biles has withdrawn from the final individual all-round competition at the Tokyo Olympic Games in order to focus on her mental health.

"Simone will continue to be evaluated daily to determine whether or not to participate in next week's individual events finals.

"Jade Carey, who has the higher score in qualifications, will participate in her place.

"We wholeheartedly support the decision and applaud her bravery in prioritising her well-being.

"Her courage shows, yet again, why she is a role model for so many."

Simone has received support from several stars following her decision.

The 63-year-old actor will star in and executive produce the upcoming LGBTQIA+ empowerment tale that is set at a gay conversion camp and also ...Read More

Molly Shannon will star in 'A Good Person'.

The 57-year-old actress has joined Florence Pugh and Morgan Freeman in the feature that will be directed by Zach Braff.

The movie tells the story of Allison (Pugh), whose life ...Read More

Rihanna has revealed her ideal sexy night in with A$AP Rocky.

The 33-year-old star has opened up on her relationship with the 32-year-old rapper, and opened up about what she likes from a steamy evening with her man.

Lady Louise Windsor found it "slightly scary" having her late grandfather, Prince Philip, "so involved" in her passion for carriage driving.

The 17-year-old royal - who is the daughter of Prince Edward and his wife Sophie...Read More

The 'No Time To Die' filmmaker insisted the spy franchise has moved on drastically with its attitude towards women since the late Scottish ...Read More

Adele and Rich Paul have met each other's children.

The 'Skyfall' singer - who has eight-year-old Angelo from her marriage to Simon Konecki - and the sports agent are said to be basically "inseparable" and not only has ...Read More