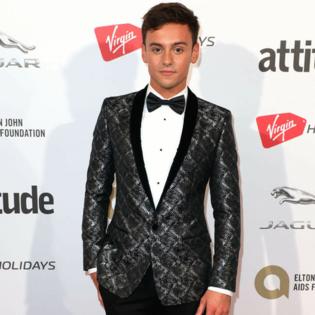 And now that he's achieved his dream, Tom hopes he can inspire other LGBT youth to feel like they can "achieve anything".

"In terms of out athletes, there are more openly out athletes at these Olympic Games than any Olympic Games previously. I came out in 2013 and when I was younger I always felt like the one that was alone and different and didn't fit. There was something about me that was never going to be as good as what society wanted me to be. I hope that any young LGBT person out there can see that no matter how alone you feel right now, you are not alone. You can achieve anything."

Despite bagging the gold, Tom insisted his career is far from over, but said he will be taking a break to spend time with his husband, Dustin Lance Black, and their three-year-old son Robbie.

He added: "You want to win an Olympic gold medal but never think you actually will. I will carry on, but I will definitely take a break. There are some beverages with my name on it to celebrate with my husband and family.

"This means an incredible amount. All athletes put in such hard work and dedication into our performances. To be an Olympic champion after four attempts at it feels extremely special."

And Tom also said welcoming his son in 2018 has been "life-changing".

He told reporters: "It's been the most amazing, life-changing journey for me and I can't wait to go and see them, my husband and my son, to give them a big hug and be able to celebrate on this incredible journey that it has been."

James Marsden has praised Christina Applegate as "inspiring" amid her battle with Multiple Sclerosis (MS).

The 48-year-old actor admitted his 'Dead to Me' co-star is a "compassionate, wonderful human being" who will "...Read More

Justin Bieber has learned to "reassesses his boundaries" to protect his own his mental health.

The 27-year-old star has admitted he's figuring out how to "say no" to things as he reflected on the challenges of life on the...Read More

The 'Will & Grace' star asked fans if she was "missing something" after it was revealed the 40-year-old reality star is to guest ...Read More

Whoopi Goldberg has signed a new four-year deal to remain on 'The View'.

The 65-year-old actress, who is in her 15th series with the talk show, is said to have put pen to paper on a new contract with the program, which ...Read More

Joseph Fiennes, Omari Hardwick and Gael Garcia Bernal have joined the cast of 'The Mother'.

The trio will appear alongside the already announced Jennifer Lopez, who will play the titular character in the Netflix thriller....Read More

Lana Del Rey is reportedly seeking "public acknowledgment" from Lorde that she inspired 'Stoned At the Nail Salon'.