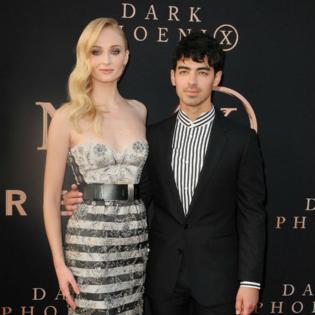 The Jonas Brothers star and the 'Game of Thrones' actress spent most of 2020 in quarantine amid the COVID-19 pandemic, and Joe has revealed their increased time at home led to some new hobbies.

But after the pair discovered their shared love for building Lego models, they also realised they had very different approaches to building, which often made them butt heads.

When asked by WSJ. magazine about a "funny or weird memory" from the past year in lockdown, he said: "I got very into Lego building. My wife and I probably built 10 monstrous Legos. It was also quite funny, because I was super focused on helping her but then I was getting easily distracted and playing Fortnite.

"At first we argued about it and then it was like, she loves her organization and it's completely different from the way I would build it: 'You do you; I'll be here for support.' So then I became moral support; I'll make the cocktails for us. We built the Batmobile; we built Harry Potter [Wizarding] World."

And the 'Sucker' singer - who married Sophie in 2019 - recently said he's thankful that the global health crisis allowed him to spend time with his family.

He said: "It's been amazing. It's been forced time at home -- I'm always on the go, I'm always moving and traveling and touring. To be in one place for a solid amount of time and having my feet on the ground and be with my family, my immediate family, is time I don't think I'll get back. I'm so thankful and grateful."

The musician added in a separate interview: "Running right onto tour after getting married I didn't really have that alone time I craved with my wife, so I was able to just be in one place which was kind of nice for a change."