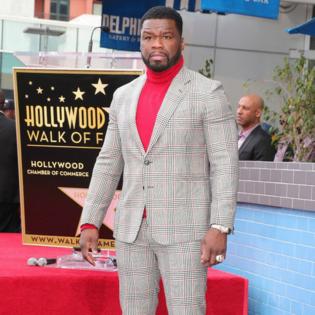 50 Cent doesn't believe in being "too rich".

The 'In Da Club' hitmaker doesn't believe people can ever have "enough" money, as there's always bigger and better things to spend money on.

He told independent.co.uk: "I don't think there's such a thing as too rich. What level of accomplishment do we reach where we look at ourselves and say, 'Enough?' There's no such thing as enough. They're going to the moon! They're gonna build 18-bedroom houses on the moon."

Meanwhile, 50 Cent previously revealed his youngest son looks at the rapper like he's a "superhero".

The 46-year-old star - who has Marquise, 24, and Sire, eight - shared: "There's a point where kids view their parents as superheroes because they don't understand everything else in life that they have to do, work and everything else to create the comforts. My little guy now, he sees me like that, he thinks, 'my dad could do it - there's no question my dad could do it', like if somebody can jump further and he'll say 'my dad can jump that far', he thinks I can do everything, and it's amazing."

He also thinks that his childhood experiences have helped to inspire his success.

He said: "I look at my journey, some of the decisions that my mom made have guided mine, and it's because people from her life had what was a representation of financial freedom, they had those nice things in front of me. They got everything that you would want.

"It kind of led me down the same path of the hustling and going to do different things, and, you know, I just hit the roof of that and wanted to do more, so I got involved in music and entertainment where we do things that exceed that level of success, completely. Like, that is the smallest thing, you know what I mean, it just felt big at that point, when I was little."

The title and release date for the third 'Fantastic Beasts' movie has been announced.

The 22-year-old rapper has revealed to fans on Twitter that he has an incomplete track that he wanted to send to the 'Born This Way' hitmaker to see if she fancied ...Read More

The 56-year-old star - who was one of the world's most famous supermodels in the 1990s - has revealed she has ...Read More

Daniel Craig celebrated getting the James Bond role by getting drunk on vodka martinis on his own.

The 53-year-old actor - who will be making his fifth and final appearance as Ian Fleming's fictional British spy in 'No ...Read More