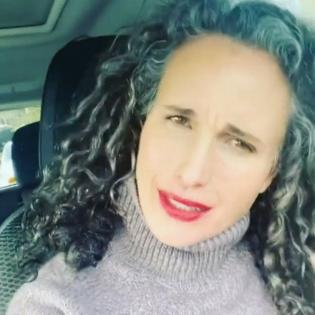 Andie MacDowell's team tried to warn her off embracing her salt-and-pepper locks.

The 63-year-old actress wowed on the red carpet at the Cannes Film Festival when she revealed her natural hair but she admitted that her managers tried to talk her out of it.

She told Vogue.com: "At the very beginning of quarantine, my hair started growing and every time my kids would see me, they kept telling me I looked badass with my gray hair. When I pulled it up in a bun, all you could see was the salt and pepper, which is what I am, you know, dark and silver. I like to compare myself to George Clooney because why not? I've been saying for a while now it was time for me, personally, to make that transition because I felt like it was appropriate for my personality and just who I am.

"During lockdown, I had a lot of downtime and became obsessed with Jack Martin, who did Jane Fonda's hair. I shared those pictures with a lot of people going, 'Hey, I want to do this.' I got a job and very quickly I had to make up my mind about what I was going to do.

Although she is now delighted that she embraced her natural hair, Andie admitted even she was slightly apprehensive about what the reaction would be.

She explained: "At first. I was so cautious because I didn't want anybody to be upset, and I was trying to figure out how I could wear wigs to please people. But then once I did it, it was just so clear to me that my instincts were right because I've never felt more powerful. I feel more honest. I feel like I'm not pretending. I feel like I'm embracing right where I am. I feel really comfortable. And in a lot of ways, I think it's more striking on my face. I just feel like it suits me."

She said: "The age on my face, to me, no longer matched. I somehow feel like I look younger because it looks more natural. It's not like I'm trying to hide something. I think that it's a power move, and that's what I kept telling my managers. It's exactly what I need to be doing right here."

Jana Kramer is still "angry" with her ex-husband Mike Caussin.

The 28-year-old actress' blossoming career may take her around the globe but she has admitted she would love to continue staying at her family home in Childwall in Liverpool with ...Read More

Gwyneth Paltrow is "solidly in perimenopause."

The 48-year-old actress has revealed she's suffering from heart palpitations, emotional turbulence and irregular periods as her body makes the natural transition to menopause...Read More

The 'Keeping Up With the Kardashians' star and the 30-year-old professional basketball player are doing a "great job" co-parenting their three-year-old ...Read More

Jennifer Lopez doesn't feel like she "belongs" in Hollywood.

The 'On the Floor' hitmaker may have over 30 movies under her belt, a successful beauty business and a music career, but she has admitted she sometimes feels ...Read More