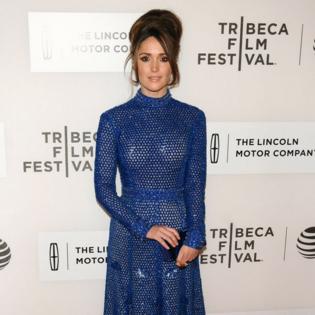 The 41-year-old actress has sons Rocco, five, and Rafa, three, with her husband Bobby Cannavale and has said she wants to make sure her children are aware of the importance of gender equality, especially when it comes to raising a family.

She said: "For a start, I teach them [about women's rights] by being a working parent. We're an example of a household that balances both parents going out to work. But I also totally respect mothers who stay home. It's really hard work. Why is [raising a family] not working? What goes on in the home is the most beneficial contribution to children and [society]."

Rose starred as Gloria Steinem in the 2020 series 'Mrs. America', and said she thought she knew about feminism before taking on the role, but learned so much about the movement while playing the journalist.

Gloria became nationally recognized as a leader and a spokeswoman for the American feminist movement in the late 1960s and early 1970s and was involved in the ultimately unsuccessful fight in the 1970s to pass the Equal Rights Amendment to the US constitution, which is what 'Mrs. America' was based on.

Rose added: "I thought I knew about feminist history before that. I'd read 'The Feminine Mystique' by Betty Friedan and 'The Beauty Myth' by Naomi Wolf, so I thought I knew. And then I realized I know nothing.

"It's a fascinating era that's largely undiscussed and undocumented. Events like the women's conference in Houston in 1977 had a huge influence on politics and administrations. The fact [the Equal Rights Amendment] was never ratified, meaning it's actually not in the US constitution that women have equal rights as men. What's so scary about being equal? Why's that such a dangerous and terrifying thing for people to embrace?"

The actress is also starring in Apple TV's 'Physical' series, which sees her play a character called Sheila Rubin who embarks on a journey of self-discovery via aerobics.

And Rose doesn't think the show - which premieres on June 18 - would have been made "five years ago", because producers weren't prepared to tell stories "about women".

She told Marie Claire Australia magazine: "Shows like 'Physical' probably wouldn't have been made five years ago. Stories about women are finally ready to be told and seen through a real female lens."