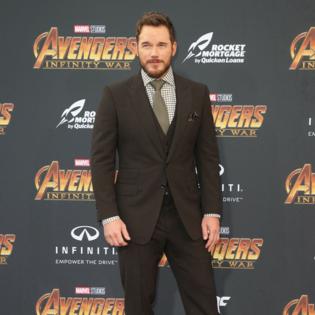 The 41-year-old actor and his wife Katherine Schwarzenegger welcomed their daughter Lyla into the world 10 months ago, and Chris has said he's already developed an adorable routine with the tot, as he sits and cuddles with her for 20 minutes before he goes to work.

He said: "She's such a little wiggle worm. The 20 minutes before I go to work is like our special time. And we sit out on this little chair or this little couch thing on the balcony, in front of the fireplace and there's this little heater, and we have our time together. It's like kid time. She's always wiggling around and you have to distract her with the toy. She doesn't want to just cuddle yet."

Lyla is currently teething, and the 'Guardians of the Galaxy' star has been soothing her discomfort with the help of a "little rubber comb" that the youngster likes to chew on.

He added to People magazine: "There's this little rubber comb thing that she chews on, it helps soothe her gums. I just started brushing her hair with it. And I realized like, 'Oh, she's going to love to go to the spa when she grows.' I could see her just relax into my lap. It's kind of the first time in her life that I've ever been able to just have her really relaxing on my lap. I combed her hair for like 15 straight minutes. The only other time she's really ever done that is when she's peeing on me. So she'll like zone out and I'm like, 'There you go there, there you go calming down. Okay, you're peeing, that's why you stopped wiggling.' And so we had a really nice moment this morning."

Chris - who is also father to eight-year-old son Jack, whom he has with his ex-wife Anna Faris - and Katherine announced Lyla's birth on Instagram in August.

They wrote in joint statements at the time: "We are beyond thrilled to announce the birth of our daughter Lyla Maria Schwarzenegger Pratt. We couldn't be happier and we feel extremely blessed! Love, Katherine and Chris."