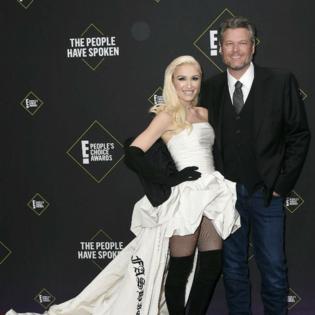 Gwen Stefani and Blake Shelton "can't wait" for their wedding.

The couple got engaged in October 2020 after almost five years of dating, and sources have now said the pair are excited to tie the knot later this summer after waiting patiently for lockdown restrictions to ease so they could invite all their loved ones to the event.

An insider said: "Ever since they got engaged, they have both been adamant that no wedding will happen until it's safe for family and friends to attend. Gwen expressed early on that she really wanted a summer wedding. She was upset earlier this year when it seemed to be no end in sight for the pandemic. She slowly started planning the wedding this spring though."

The source also revealed Gwen's sons - Kingston, 15, Zuma, 12, and Apollo, seven, whom she has with her ex-husband Gavin Rossdale - will be "very involved" with the ceremony.

Speaking to People magazine, they added: "They are both ecstatic that it can finally happen. They are getting married this summer. Gwen's boys will be very involved. Blake is a great extra dad and very close with the boys."

She said: "We're keeping it very simple. Really simple. I think the guest list will not have a lot of musicians. It'll be like my mom and my dad. It's literally going to be just family. We are looking forward to that, though.

"It's going to be fun. We're going to make it really fun, but it's not going to be a big [event]. It's not like the queen and king are getting married or something like that."

While Blake said their nuptials will be "great", but only if 51-year-old Gwen does all the planning.

He joked: "I want her to do all of that stuff and handle it because it's going to be great.

"If I was picking our meal, it would just literally be everything fried. French fries, chicken tenders - you know, all of that stuff. I think she knows that it would be a pretty classless wedding if I was in control."