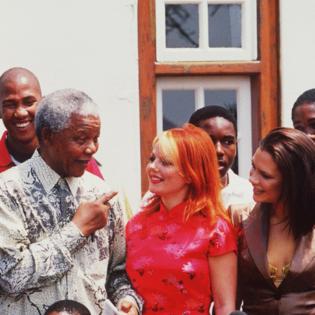 The pop group famously met with the late South African President in late 1997 when he invited them to his Pretoria residence for a chat and photos whilst the 'Wannabe' hitmakers were in Johannesburg to perform at a charity concert, with the anti-apartheid campaigner - who died in December 2013 aged 95 - saying during the encounter "these are my heroes, this is one of the greatest moments in my life".

Now, the Spice Girls' former make-up artist Karin Darnell has shared her memories of the trip, revealing that she had to get the five members - Victoria Beckham, Mel B, Emma Bunton, Geri Horner and Mel C - prepared for the momentous meeting with the head of state in a cramped van.

Speaking to Stylist magazine, she recalled: "I first met the girls when they performed Wannabe on a kids' TV show called 'Boiled Egg and Soldiers', I got them all ready in an hour and after the performance I said to Geri, 'Wouldn't it be funny if the next time we met was on 'Top of the Pops' and you were number one.' And sure enough, that's what happened. From then on, I worked on all their videos, tours and the movie.

"We went on to have so many memorable moments together. I remember making them up in the back of a Transit van in South Africa - they were on their way to meet Nelson Mandela. I was trying not to throw up from travel sickness while doing a red lip."

Karin has also praised the 'Spice Up Your Life' group for putting their Girl Power slogan into practice, insisting they never failed to use their fame and influence to stick up for the "underdog" and were way "ahead of their time" when it came to promoting equality between the sexes.

He said: "What struck me was how they stood up for the underdog. If a photographer was rude to an assistant, Mel B would say, 'I'm not carrying on until you treat people better.' I guess that was Girl Power in action. If someone wolf-whistled them or made a derogatory remark, they'd call it out. In that way they were ahead of their time."