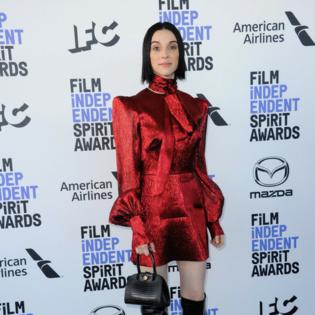 When asked by the Financial Times newspaper, "Ambition or talent: which matters more to success?", she replied: "Work and luck are the two things. The world is filled with really talented people for whom it doesn't work out. It's not a meritocracy."

St Vincent - whose real name is Annie Clark - also revealed her music mentors were her aunt and uncle.

She said: "In my early days, my aunt and uncle [jazz duo] Tuck & Patti. They knew I was obsessed with music, so they took me on tour with them, taught me the ropes of the road, and, philosophically, a lot of the things about work ethic that I carry with me today. I work really hard, but still never as hard as when I was on tour with Tuck & Patti."

St Vincent recently released new album 'Daddy's Home' and said if her 20-year-old self could see where she is in her life now, she'd be shocked.

She said: "She'd be relieved she wasn't dead. I can't think what I was like at 20, just that I was green, nor what my 20-year-old self would think of me now."