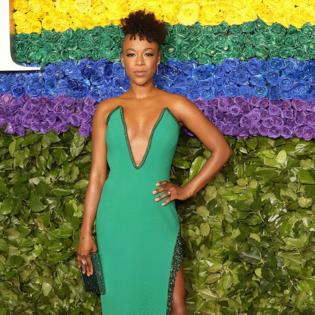 Samira Wiley says people keep asking her why she called her daughter George.

The 34-year-old actress and her wife Lauren Morelli welcomed a daughter named George Elizabeth into the world on April 11, and Samira has now said people won't stop questioning their choice of moniker.

Samira insisted she and Lauren just "really liked the name", and said that after doing research, they discovered it actually used to be a girls' name before it began to traditionally be used for boys.

During an appearance on 'Jimmy Kimmel Live!', she said: "People are very confused, some people, by it. We got to teach the new generation about this because I wish that I had some really in-depth story to tell people about George, because I know that's what people want [and] you got to give the people what they want. But I just really like the name, I just think it's really cute.

"I tried to do some research, I found out in the 1800s it was a girls' name, but people don't believe me when I say that."

The 'Orange is the New Black' star then also highlighted that Nancy Drew's best friend, who is a girl, was also named George.

Samira and Lauren announced the birth of their daughter on Mother's Day (09.05.21), almost a month after George was born.

"Welcome to the world, babygirl. We love you and we thank you for giving us the best 1st Mother's Day two ladies could ask for.

The 38-year-old writer shared the same picture on her own account.

She captioned it: "4 weeks ago today, our daughter came into the world and changed everything. We are so happy, so grateful, and so tired. George Elizabeth, 4.11.21 [heart emoji] (sic)"