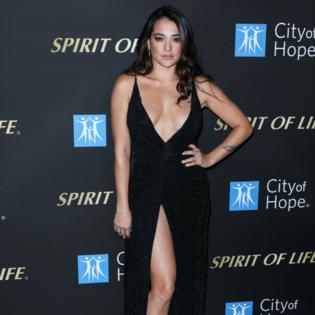 Natalie Martinez has described Chadwick Boseman as the "epitome of a gentleman".

The 36-year-old actress worked with the late actor - who tragically passed away from colon cancer in 2020 at the age of just 43 - on the 2016 thriller 'Message from the King', and has nothing but wonderful memories of him, especially of the way he completely put her at ease when filming their "racy" scenes.

In an interview with US Maxim magazine, she said: "He was the epitome of a gentleman. Every time I was with him I'd get so happy cause he was so humble, so sweet, always so nice. We has some pretty racy scenes in 'Message from the King'. When we shot them, he was a class act. I was super comfortable. He was always making sure everything's okay with me He was an actor's actor, where I definitely felt like I got stuff out of him and vice versa. I was really fortunate to shoot with him."

Natalie landed her film debut in 2008's 'Death Race' alongside Jason Statham and after 13 years in the business she still loves "play pretend".

She said: "My whole idea of success in this business is to continually work. That, to me, is a successful career. And I'm proud to have gone this long and stayed in the game this long through all the changes in Hollywood. So, I have such a blast. I mean, c'mon, I get to play pretend all day. This is so much fun!"

The 'End of Watch' star is ready to take her career to the next level by landing a superhero role, and she would also love to be in the running to be the first-ever female James Bond once Daniel Craig steps down from the role of 007 following the release the delayed 'No Time To Die' later this year.

The pop group famously met with the late South African President in late 1997 when he invited them to his Pretoria residence for a chat and ...Read More

Dwayne 'The Rock' Johnson didn't have "political passions" until the public called on him to run to be President in the future.

The former WWE star turned Hollywood actor has discussed the idea of running for office over ...Read More

The 36-year-old actress has played the role of Natasha Romanoff/ Black Widow in the Marvel Cinematic Universe for over ...Read More

Kanye West "likes spending time" with Irina Shayk and is happy to enjoy things as they progress.

The 44-year-old rapper has reportedly embarked on a romance with the 35-year-old model following the breakdown of his ...Read More

Hugh Grant is enjoying his acting career more now, because he doesn't have the pressure of being the leading man.

The 60-year-old actor made his name as the romantic lead in romcoms like 'Four Weddings and a Funeral', '...Read More

Jason Isaacs would be willing to return to 'Harry Potter' and 'Star Trek'.

The 58-year-old actor has starred as Lucius Malfoy and Captain Gabriel Lorca in the respective franchises - as well as lending his voice to the '...Read More