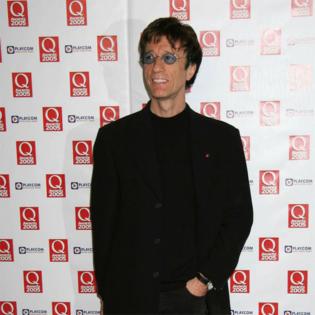 Robin Gibb's son Robin-John Gibb thinks his late father sent him a message about their baby.

The 38-year-old singer songwriter and his partner Megan - who have sons Maxwell-Robin John, seven, and Theodore-Alexander, five, and 11-year-old daughter Ella - are expecting their fourth child, and their son is due on May 20, which will mark the ninth anniversary of the Bee Gees' legend's death aged 62.

Speaking to HELLO! magazine, Robin-John said: "We had our first appointment with Colin Davis, the obstetrician who delivered our two sons, at the end of October, and as we sat down in the waiting room, the Bee Gees' hit 'More Than A Woman' came on the radio.

"The timing of it was such a surprise that we couldn't help wondering if it was a sign.

"We didn't know we were expecting a boy at this stage and initially thought the title of the song could be my father's way of telling us we were having a girl."

Even after finding out they were having another son, the couple still think the song might have been a message from Robin.

Megan added: "RJ's dad loved riddles and even when he was ill, still retained his amazing sense of humor.

"So if indeed it was him, I think he was being funny and wanted to keep us guessing about the baby's gender.

"It's certainly strange how, wherever we are in the world, a Bee Gees hit inevitably comes on the radio. It always seems to happen when we're talking about him or the Bee Gees in general. It's reassuring, as if Robin is watching over us."

Meanwhile, the 'Night Fever' hitmaker is kept alive in the memories of his family, with Megan and Robin-John both seeing glimpses of him in their own children.

She said: "We always wonder how he would have been with the kids, especially as Ella, Max and Teddy are such lively, goofy characters. They remind us of Grandad when he was a boy, and his twin brother Maurice."

The pop group famously met with the late South African President in late 1997 when he invited them to his Pretoria residence for a chat and ...Read More

Dwayne 'The Rock' Johnson didn't have "political passions" until the public called on him to run to be President in the future.

The former WWE star turned Hollywood actor has discussed the idea of running for office over ...Read More

The 36-year-old actress has played the role of Natasha Romanoff/ Black Widow in the Marvel Cinematic Universe for over ...Read More

Kanye West "likes spending time" with Irina Shayk and is happy to enjoy things as they progress.

The 44-year-old rapper has reportedly embarked on a romance with the 35-year-old model following the breakdown of his ...Read More

Hugh Grant is enjoying his acting career more now, because he doesn't have the pressure of being the leading man.

The 60-year-old actor made his name as the romantic lead in romcoms like 'Four Weddings and a Funeral', '...Read More

Jason Isaacs would be willing to return to 'Harry Potter' and 'Star Trek'.

The 58-year-old actor has starred as Lucius Malfoy and Captain Gabriel Lorca in the respective franchises - as well as lending his voice to the '...Read More