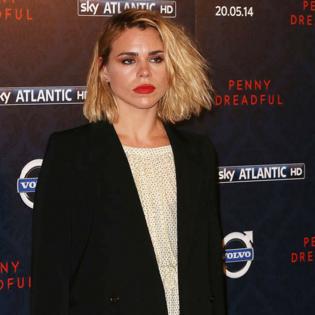 Billie Piper isn't comfortable with the "responsibility" of returning to 'Doctor Who'.

The 'I Hate Suzie' star has made several appearances in the show since leaving her role as Rose Tyler in 2006, including a three episode stint in 2008 and portraying a character known as 'The Moment', a version of Rose, in the 50th anniversary special 'The Day of the Doctor' in 2013.

However, Billie has ruled out a full-time return as Rose - who was a companion to Ninth Doctor Christopher Eccleston and Tenth Doctor David Tennant -because of the pressures of being "the face" of a programme loved by viewers of all ages.

Speaking to Total Film magazine, she said: "I couldn't. It's so much work!

"It's the face of a family show and that's a lot of responsibility that I'm not comfortable with."

With speculation mounting that Jodie Whittaker is set to step down from the title role after the next series, Billie would love to see 'The Crown' actress Helena Bonham Carter take over as the Doctor.

Asked who should be next in the role, she said: "Oh I know who! Helena Bonham Carter. She's just got that madcap energy. She's a ruddy powerhouse."

Meanwhile, Billie and her collaborator Lucy Prebble are preparing to start work on a second series of 'I Hate Suzie', but she admitted it's taking them some time to figure out what they wanted to do in the new episodes.

She said: "We haven't worked it out yet. We think we've got a good idea. It's taken us a while to get there."