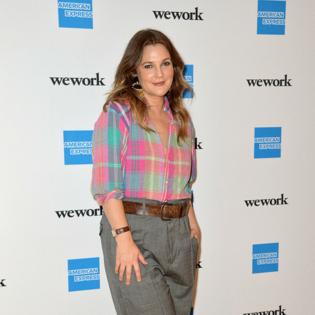 The 46-year-old actress has two daughters - eight-year-old Olive and seven-year-old Frankie - with her ex Will Kopelman and has said she was "terrified" when her first child was born, and found the experience isolating.

Speaking during her 'Dear Drew' segment on 'Entertainment Tonight', she said: "I thought it would be a little more romantic and cosy, and instead I was just terrified. I was so under slept, I couldn't eat, I was nervous all the time. So, I wasn't really prepared for that.

"I felt alone on that, so if there's other moms out there that felt like that in the beginning, you are not alone, I felt like that too. For any mom who felt casual and capable, you are a superhero! I wish I could have been like you."

Drew is now fully settled into life as a mother, and says she has regularly scheduled "alone time" when her daughters are "busy".

She added: "I find I'm good to squeeze in alone time, me time, when they're busy. That helps absolve the guilt. Like while they're in school or at a play date, and somehow that feels a little less guilty."

And the 'Charlie's Angels' star also told viewers they're not alone if they've wanted to scream after being told to be more "present" with their children.

She said: "You know, as a parent, when you're not leaning in enough. The only advice I have for a mom to be present is when she is by herself. That's when they should be present!"

Meanwhile, Drew got a tattoo on her talk show on Thursday (06.05.21) when she had the words 'Home is where we are' etched onto her arm.

She said: "I am so excited I came up with this phrase and I've been saying it to myself for the last five years it's, 'Home is where we are.' You know if you are somewhere on vacation or you are in a rental or you are in transition or you have to move from state to the next, if you're together, that's where home is."